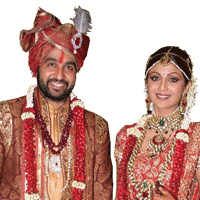 All the outfits Shilpa wore at the three main events of her wedding celebrations were designed by Tarun Tahiliani. Raj wore Sherwanis by designers Shantanu-Nikhil for the wedding as well as the reception.