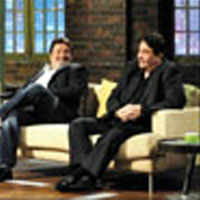 Bollywood Fathers and Their Children

The Indian film industry is not an exception. For the last seven decades, one has seen an actor’s son or daughter joining the film bandwagon. A discussion along this line inevitably begins with the first family of Bollywood – the Kapoors’.

Often, children will idolize their fathers and often make a conscious effort to follow in his footsteps. This is a trend seen all over the world and India is not an exception. In politics, sports, art and culture, and music, we see the same phenomenon.

The Indian film industry is not an exception. For the last seven decades, one has seen an actor’s son or daughter joining the filmy bandwagon. A discussion along this line inevitably begins with the first family of Bollywood – the Kapoors’.

Prithviraj Kapoor was a famous theatre and film personality who started the long line of Kapoors’ in Bollywood. His characterization of the Moghul emperor Akbar in the epic Mughal-e-Azm still enthralls the young and the old. However, his family name was taken to new heights by his three prodigal sons – Raj, Shammi, and Shashi. Raj Kapoor needs no introduction as his name and fame surpasses the boundaries of time and nations. He is revered all over the world for his classic films as such as Awara, Mera Naam Joker, Baarsaat, and Shree 420. As a director, Raj made his mark with these filims: Bobby, Ram Teri Ganga Maili, and Prem Rog. Shammi Kapoor made a niche for himself as the ‘rebel’ star with his stardom reaching new heighst in Junglee, Kashmir ki Kali, Teesri Manzil, and Brahmachari. Younger brother Shashi was the least successful of the three, but he too was prominent in films like Jab Jab Phool Khile, New Delhi Times, and Kalyug.

Following the family trend, Raj Kapoor’s three sons, Randhir, Rishi, and Rajiv, also joined the film industry, with Rishi really making it big. The eternal lover-boy, Rishi had been a luminary in his own right. His films, totaling more than hundred, made him an ‘always-in demand’ actor throughout the 1970s, 1980s and even the 1990s. His brothers Randhir and Rajiv, to a lesser extent, were also fairly successful in this field, though overwhelming stardom eluded them. The mantle of filmdom in the family continued even into the fourth generation as Karisma and Kareena, the two daughters of Randhir, became lead heroines in the industry delivering big hits. While Karisma has retired from films, Kareena is still one of the top three lead actress in Bollywood. The recent entry to the film industry has been Rishi’s son Ranbeer Raj Kapoor, who made a grand entry in 2007 in the film Sawaaariya.

Another famous father of the film industry is Dharmendra. The man himself is reigning in the industry for almost half a century entertaining his millions of fans with stupendous performances in almost all types of roles. The first ‘He-Man’ of films, Dharmendra will always be remembered for his sensitive acting, comic timing, and action packed roles in films like Sholay, Satyakam, Chupke Chupke, Dharam-Veer, and Yaadon ki Baraat. Dharmendra’s two sons, Sunny and Bobby Deol, are also stars in their own rights. Sunny Deol, in particular, successfully carries the ‘tough man’ tag and has acted in several highly successful action films and has created a niche for himself. Bobby, though a late entrant, is making a sustained effort to uphold the family name. Incidentally, the 2007 hit Apne was the first and only film where the father and the two sons featured together. Dharmendra’s daughter from his marriage with the leading actress Hema Malini, Esha Deol is also in the films and is trying to make a significant mark in Bollywood, though she has few hit films to speak about.

Moving to another family, where two star brothers have their boys acting in films. Feroz Khan was another tough guy of the 1970s and the 1980s. He kept audiences enthralled through his larger than life roles in films like Dharmatma and Qurbani. His son Fardeen Khan is now one of the leading actors in Bollywood as is his cousin brother Zayed Khan, son of Sanjay Khan. Sanjay, however, was not as successful like Feroz but made his name in a few memorable films as well as in television ventures.

The Roshans also carry a long tradition in the industry. Roshan was one of the leading music directors in the 1950s and 1960s, and he composed numerous evergreen humming numbers. His sons Rakesh Roshan and Rajesh Roshan were also successful in Bollywood, though Rakesh was an actor and Rajesh a composer. Probably the most luminous member of the family has been the son of Rakesh, Hrithik Roshan, who is one of the top actors in the film industry today. He is sure to be viewed as the sure shot Number 1 in coming days. Hrithik has a number of hit films under his belt and commands an unprecedented price for his appearance.

Like Feroz Khan and Dharmendra, another contemporary, Vinod Khanna was also a name to reckon with in the late 1960s – 1980s. His films, Qurbani, Dayavaan, and Hera Feri, are still features on the list of must-see Hindi films. Vinod’s sons, Akshaye and Rahul Khanna, followed their father’s footsteps and are established actors. Of the two, Akshaye is one of the highest billed actors in the industry. He is known most for his comedy films, while brother Rahul is seen more in cerebral films than commercial potboilers.

The stalwarts of the fifties, sixties and seventies too have their wards into the films. Sunil Dutt, who was in a number of highly memorable films like Mera Saaya, Milan Waqt, and Mother India, was married to Nargis and their son Sanjay Dutt is one of the best actors in the industry. Though often mired in controversy over drugs or illegal possession of arms, Sanjay has been able to make his mark in the industry through scintillating performances, especially after the Munnabhai series, which catapulted him to the big league.

However not all father-child pairs in Bollywood are as famous as the ones mentioned above. One such pair is that of Balraj Sahni and Parikshit Sahni. While Balraj was a pillar of the film industry in the 1950s and 1960s when he made heart-rendering performances in films like Waqt and Seema, his son Parikshit could not live up to the expectation. The same can be said about Raj Kumar and Puru Raj Kumar. While the father was a stalwart in the industry famous for his dialogues and style statement, son Puru faded away into oblivion without much success. Dev Anand, the evergreen hero of all times needs no introduction, but then his son Sunil Anand could not meet with minimal success in the industry.

And of course, how can such a discussion end without mentioning the Kings of Bollywood – the Bachchans. Amitabh Bachchan has remained the insignia of Bollywood even during the last three decades. His films Don, Zanjeer, Sholay, Akhree Rasta, and Deewar, of the 1970s and 1980s to the more recent Khuda Gawah, Black, and Mohabbatein, has kept the audience coming back to the theatre again and again and again. Bachchan’s success as a megastar has reached unbelievable heights, and he is revered not only in India, but also all over the world. His able son, Abhishek, could not get the start a junior Bachhan would have liked, but he has gradually made it in the industry. His recent films have done very well, and Abhishek is now regarded as a bankable solo lead in the industry.

Rakesh Roshan and Rajesh Roshan were also successful in Bollywood, though Rakesh was an actor and Rajesh a composer. Probably the most luminous member of the family has been the son of Rakesh, Hrithik Roshan, who is one of the top actors in the film industry today. He is sure to be viewed as the sure shot Number 1 in coming days. Hrithik has a number of hit films under his belt and commands an unprecedented price for his appearance.