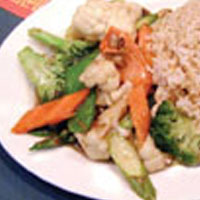 For the first time, an internationally acclaimed journal on modern medicine has published an elaborate article on the efficacy of Siddha medicine, the traditional system of Tamil Nadu, in curing skin diseases. The article was written by J. Joseph Thas, a qualified allopath and Siddha practitioner from Kanyakumari district and formerly professor of Postgraduate Studies and Research Centre, Government Siddha Medical College, Tirunelveli.

The journal carried a detailed article with 50 color photographs on my experience in curing complicated skin diseases. No other article from any alternative system of medicine has found a place in this publication so far. Thus, Siddha medicine has been accepted as a relevant system to 21st century lifestyle and dermatology by International Association of Cosmetic Dermatology,” an elated Dr. Thas told reporters.

Vegetarian is the New Prius

Last month, the United Nations published a report on livestock and the environment with a stunning conclusion: “The livestock sector emerges as one of the top two or three most significant contributors to the most serious environmental problems, at every scale from local to global.” It turns out that raising animals for food is a primary cause of land degradation, air pollution, water shortage, water pollution, loss of biodiversity, and not least of all, global warming. It seems that when you step outside and wonder what happened to winter, you might want to think about what you had for dinner last night. The U.N. report says almost a fifth of global warming emissions come from livestock.

It sounds like a lot of bad news, but in fact, it’s quite the opposite. It means we have a powerful new weapon to use in addressing the most serious environmental crisis ever to face humanity. Now that we know a greener diet is even more effective than a greener car, we can make a difference at every single meal.

British Airways (BA) has taken beef off the menu for economy passengers amid concerns about its “religious restrictions.” BA’s second-biggest long-haul market is to India, where the majority Hindu population do not eat beef because of their beliefs.
The decision to scrap the nation’s favorite fare was described as a “great shame” by the English Beef and Lamb Executive, formerly part of the Meat and Livestock Commission. A spokesman said: “It is regrettable that Britain’s flag carrier is not proposing to serve Britain’s national dish.”

The Hindu Council UK said: “The Hindu community will welcome this decision and the news it has been made partly because Hindus don’t eat beef. Hindus have a great deal of respect for British culture. That said, Hindus are tolerant of the beliefs of others and do not expect everyone to stop eating a food because they do not eat it.”
BA also said that cost is not a reason for the decision to stop serving beef.

New Generation of Leading Neuroscientists Opens The Door For God

Over the past several years, scientific momentum has shifted away from hard-core materialism. The brain seems less like a cold machine. Instead meaning, belief, and consciousness seem to emerge mysteriously from idiosyncratic networks of neural firings.

Now, scientists have more respect for elevated spiritual states. Andrew Newberg of the University of Pennsylvania has shown that transcendent experiences can actually be identified and measured in the brain (people experience a decrease in activity in the parietal lobe, which orients us in space). The mind seems to have the ability to transcend itself and merge with a larger presence that feels more real.

E-Book Released: “How to Successfully Become a Vegetarian”

The website, www.veggie123. com, has published a free e-book called “How to Successfully Become a Vegetarian.” The book describes the basic forms of vegetarianism, the history, reasons for becoming vegetarian, and finally the various issues one faces: nutrition, eating out, and cooking.

UK scientists are proving meditation based psychological therapies are effective. A popular course called Mindfulness Based Cognitive Therapy (MBCT), which primarily consists of meditation is currently available in every county across the UK, and can be prescribed on the NHS. One of the pioneers of MBCT is Professor Mark Williams, from the Department of Psychiatry at the University of Oxford. He helps to lead group courses, which take place over a period of eight weeks. He describes the approach as 80% meditation, 20% cognitive therapy. He said: “It teaches a way of looking at problems, observing them clearly but not necessarily trying to fix them or solve them. It suggests to people that they begin to see all their thoughts as just thoughts, whether they are positive, negative or neutral.” MBCT is recommended for people who are not currently depressed, but who have had three or more bouts of depression in their lives. Trials suggest that the course reduces the likelihood of another attack of depression by over 50%.