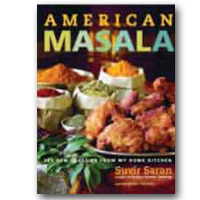 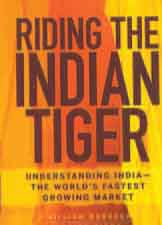 Indian and American cooking that combines the best the two have to offer, yielding dishes that are both familiar and new. A native of Delhi who has lived in America for almost 20 years, Suvir has embraced classic American dishes like cornbread, brownies, and fried chicken. At the same time, he still loves the dishes and cooking techniques he learned in India, which include tricks like toasting herbs and spices to develop their flavors or finishing a dish with an infusion of flavored oil to add a note of brightness. In American Masala, he delivers unexpected yet familiar recipes utilizing Indian spices that layer flavors in simple but profound ways.

For example, he adds a bit of cayenne to flattened cutlets before dipping them in highly seasoned breadcrumbs for a completely addictive new take on chicken parmesan dubbed parmesan spiced chicken cutlets or using three kinds of lentils in the lentil and vegetable stew for a more complex flavor and texture.

Some recipes in American Masala begin with Indian dishes that have been adapted to American ingredients, while others live someplace in between. Whether inspired by one culture or the other, all of the recipes are easy, beautiful, and taste amazing. From snacks and starters to the evening meal, the Indian influence brightens the flavors in dishes like sweet pepper and onion bruschetta, spicy orange babyback ribs, and tandoori roast Cornish hens.

American Masala isn’t about traditional Indian food – it’s about adding new flavors to the great American melting pot, using spices to liven up the old standbys, and enjoying dishes that are exciting yet as comforting as your mother’s cooking.

Suvir Saran, author of Indian Home Cooking, has received numerous accolades for his regional Indian cooking. The restaurant at which he is co-executive chef, Devi, earned widespread critical acclaim and is the only Indian restaurant in New York to earn a coveted Michelin star. His latest endeavors include a new restaurant in Philadelphia, and a chain of casual dining restaurants scheduled to open in 2008. He is a contributing editor to Food Arts magazine and teaches Indian cooking classes that have been featured in the New York Times. He divides his time between New York City and his farm in upstate New York.

by William Nobrega and Ashish Singha Wal-Mart, GE, and Microsoft have all opened major opera-tions in India, while Shell and General Motors have invested in about 3,000 new factories on the subcontinent. Why are these titanic companies pouring funds into a country known for its slow economic growth? Because today, there is a new India.

The new India is a raging tiger in today’s world economy that may unseat China as Asia’s largest economic superpower. Shedding its socialist-dominated government of the twentieth century, India has embraced capitalism, as large private equity funds and a healthy middle class expand at a breakneck speed.

Riding the Indian Tiger explains how business new India, including:

• A detailed profile of India’s financial markets
• Indian business culture
• Why India will outperform China in the coming years
• India’s improving infrastructure • What lies beyond IT and outsourcing
• A clear forecast of the opportunities ahead India’s long history of Western economic domination is over. It has finally overcome the legacy orNehru, whose socialist policies stunted economic growth, modernization, and global competitiveness for forty years. Detailed and informative, Riding the Indian Tiger explains the rules for succeeding in India’s burgeoning market.

WILLIAM NOBREGA is President and founder of The Conrad Group, LLC, (www.conradgroupinc.com), a consulting firm specializing in emerging market strategic planning and advisory services for institutions. He has authored numerous articles and been the subject of many profiles on television and in newspapers.

ASHISH SINHA is the COO of Research, a UK-based research and analytics offshoring firm. He has more than twelve years of experience in investment banking, consulting, and knowledge process outsourcing. Over the last six years, Ashish has built business research capabilities at McKinsey & Company and GE Capital.

Excerpts from the book

“The India Railroad Authority is an agency that was almost bankrupt 10 years ago but is now generating over $5 billion in free cash every year and has begun a massive modernization program of its own.”

“India is now at the beginning of what may be the most amazing transformation of a free market economy in modern history” “Education is highly valued in India society, and with access to quality education that includes skilled vocational trades such as electricians, auto mechanics, plumbers, welders, and others, a much larger percentage of the Indian population will be able to have a productive and meaningful livelihood. “

“An educated and entrepreneurial populace combined with an entrenched democracy will create the foundation for what may be the greatest economic and social success story of modern history.”

Q and A with author, William Nobrega

Q: How did you meet Ashish?

A: Through Chicago GSB and one of the professors. Marvin Zonis is a mutual friend.

Q: How is the University of Chicago helping your India project?

A: Marvin Zonis and many other professors provided editorial guidance, and they opened the doors to a number of key India relationships. Marvin was my mentor for this book.

Q: What other books have you written?

A: This is the first one to be published, but I have two more in queue – The Next Wave and Going Global without Going Under.

Q: Besides Ashish, who helped you to do research to write this book?

A: Our own team consisted of four dedicated analysts.

Q: How did you find enough hours in a day to be a writer, businessman, and husband?

A: I have a VERY understanding wife, but the reality is that when you have a passion for something you can always find the time.

The new India is a raging tiger in today’s world economy that may unseat China as Asia’s largest economic superpower. Shedding its socialist-dominated government of the twentieth century, India has embraced capitalism, as large private equity funds and a healthy middle class expand at a breakneck speed.

Q: What are some factors impending India’s progress?

A: India still has big hurdles in front of her, some of which include wide scale poverty and illiteracy. Additionally what gives India competitive advantage (democracy) can also tend to impede India’s progress as democracy demands debate and compromise!

Q: What was your first impression about Indians?

A: Extremely bright, creative, entrepreneurial, and very committed to the success of India!

Q: What is your last impression about Indians?

A: Extremely bright, creative, entrepreneurial and very committed to the success of India!

Q: Are there any stories you are particularly fond of connecting to India?

A: The success of Indian entrepreneurs which I highlight in my book. They mirror the experiences, mindset, and dedication of their American counterparts!

Q: What was your best experience in India?

A: Engaging conversations and debates with my Indian friends!

Q: What was your worst experience in India?

A: Seeing children living on the street!

Q: If you have to list one single factor that contributed India’s success what that will be?

A: The Indian entrepreneur.

Q: You have covered wide variety of topics in your book, but you have not much talked about corruption in India. Why?

A: Corruption in India is a fact, and I would not understate that fact. But like all democracies, corruption in India will become less tolerated as the populace becomes more informed and more demanding vis-àvis the quality and responsiveness of government. The United States government was also mired in corruption on the early days of our democracy, but as the populace became more informed, educated, and prosperous they demanded accountability for their government. The key for India will be education without an educated populace the full benefits of a democracy cannot be realized and corruption will continue to be a sad reality!