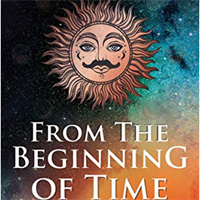 Book Review of From the Beginning of Time 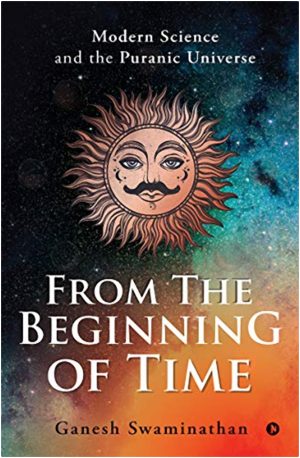 It hardly ever happened in recent times that I read a book from cover to cover within a few days, due to the huge daily influx of information via the internet. But it happened after I received From the Beginning of Time – Modern Science and the Puranas by Ganesh Swaminathan.

The Puranas fascinate me ever since I started many months ago to study the Srimad Bhagavata Mahapurana (1700 pages in English), and I am glad that more and more books come out on the Puranas. It seems that slowly the realization dawns that the Puranas are an incredible treasure house of knowledge in many fields – knowledge that is so vast and a lot of it so ‘far out’ that it actually couldn’t be obtained by mere humans stationed on earth. Strangely the impression was created (by whom?) that the Puranas are only mythological stories, about fights between gods and demons and about the life of Avatars. And they are mainly meant to promote a dharmic, righteous life and devotion for the Divine in common people through stories, as Vedic philosophy is too complex for them. At least that was the impression I got in my early time in India.

It is often not known that all the 18 main Puranas start with the creation of the cosmos, a fact, that should make us sit up and reflect. Who could have recorded it? Who was present? Or is it just all plain imagination, like the fairytale that God created the world in 6 days some 6000 years ago, which has been disproven by now, as science estimates that the world is 4,5 billion years old.

Ganesh Swaminathan puts the spotlight on the rational aspects or interpretations of the Puranic stories of creation. He wants to show that those stories are not fairytales but amazingly in tune with the modern scientific framework in regard to the topics he selected. The topics include: the lifecycle of the sun, the moon, the history and geography of the earth, and the different lokas above and below our earth. Further, the descent of Ganga, the story about the Great Flood in different cultures and the Puranic universe in general with its huge timelines have also chapters in the book with many quotes from different Puranas. Those quotes make the book a worthy read in itself.

The author gives first a detailed, informative summary of the insights of modern science regarding these topics, for example from postulated or observed astronomical phenomena and events, and then compares them with the stories in the Puranas and his interpretation.

Not surprisingly, in many instances, the scientific and Puranic views are close to each other, for example the five stages of the life cycle of the sun or that water came from outer space, or that the moon rises each day next to another star (nakshatra), etc. In other instances, the interpretation of the author can be open for debate, for example his view that the North Pole could be seen as Mount Meru.

The author expresses his surprise how such old texts, like the Puranas, could know what modern science knows. However, it may be more surprising how science could discover this knowledge. The book starts with a quote from the Brahmanda Purana:

“Hence listen to this summary. Narayana creates the world. It is on that occasion of creation when he makes this entire Purana. It does not remain at the time of annihilation.”

We live in a time where “divine creation” is looked down upon as unscientific. We take it for granted that “of course” science knows that our earth is part of the solar system, and that we know the other planets, and can trace their position. Google says that the “five planets were known since ancient times”. And it is made to look as if it is not a big deal that the ancients knew about the planets. “They can be seen with the naked eye, and are given as explanation.”

But how to know that certain lights in the night sky full of lights are planets of our sun and relatively close by? While other lights are like our sun and far, far away? Even if we watch the sky for thousands of years, we cannot come to this conclusion, can we? Only when Indian knowledge contained in the Puranas, Surya Siddhanta, etc., reached Europe, together with math and tables to calculate their position and the constellations in the sky, “science” suddenly took off and models about the cosmos appeared. At first these models were hampered by the Church. It tried to suppress them to make its religious claims more acceptable. Only 400 years ago, in 1600 CE Giordano Bruno was still burnt at the stake by the Church because he did not recant heretic (Indian) ideas about the universe. But ultimately, the Church had to give in.

Swaminathan credits science with a lot of worthwhile insights, but he also points out that the scientific claims are so far only models. For example the theory that the earth was in the beginning a fireball got in recent time competition from another theory which suspects that the earth was in temperate water, after probes from 4 billion year old stones indicated this.

Incidentally, the Puranas accommodate both these claims. They say that at the end of Brahma’s day, the earth first becomes an inferno due to the sun becoming a giant and then, when the sun diminishes and cools, the heat turns into a deluge of water which submerges everything during the night of Brahma. Most Indians are familiar with the story of Vishnu incarnating as a boar to bring out the earth which was lying submerged in water at the start of our present cycle of creation, which lasts for a day of Brahma, or 4,32 billion years.

The book is definitely an interesting read. However, in the process of making the Puranic narrative “scientific” the universe becomes lifeless, whereas the quotes from the Puranas project a universe full of life and divine entities. While the Puranas give Brahma the credit for creation, science turns it into dark, lifeless chance. Would the creation make any sense if there is no awareness inherent in it? Science still sees the awareness in human beings only as a chance by-product of the material brain. Is it possible that this chance consciousness of humans on earth and maybe on some other planets would be the only knower and enjoyer of such an unimaginably vast, mysterious cosmos while everything else is dead matter?

I wished the author had incorporated the imperative role of awareness and even the possible personification of celestial bodies into the narrative. For example, most Indians don’t see Surya Bhagawan as merely lifeless matter but endowed with awareness and identity. Unfortunately, it requires courage to express such views, as so-called scientists may call one mad. Yet Hindus could have this courage. Their ancient texts are the basis for modern science. In all likelihood, it won’t take long and Darwin’s theory and the view that the Big Bang happened by chance will go out of fashion. So why not challenge it already now and stand by the ancient knowledge before the West changes its view?

Regarding the divine origin of the Puranas, the author preferred to let the text speak for itself. Yet to make it acceptable for “scientific minded” people, he went with the view that they are “2000 years old.”

The last chapter is dedicated to the life and immense contribution of Maharishi Vyasa, who not only compiled and simplified the Vedas, but also simplified the Puranas, which were at his time already “old.” The author quotes from the Matsya Purana that the original 100 crore Slokas were condensed by Vyasa into four lakh Slokas. Even now in Devaloka they have the original number.

Incidentally, the Jesuits got the Puranas translated in the 17th century by Brahmins in Kerala and then Jesuits were suddenly at the cutting edge of science, of course only in those fields which the Church allowed. Western universities valued Indian knowledge greatly in the 18th and 19th century. When Tuebingen University in Germany for example received the Srimad Bhagavata and 10 other ancient Indian texts from a missionary in 1839, the Dean praised them as an ornament for the university and added ruefully that this treasure however is small in comparison to the treasure which the India House in London possesses. So it can be safely assumed that a lot of modern science is based on the knowledge of the huge body of Puranas.

Some of it may have been misunderstood, too. For example, it is intriguing that, though till recently the earth was claimed to be 6000 years old, suddenly the age was expanded to a huge 4,5 billion years. Incidentally, the Puranas claim that the lifespan of the earth is 4,32 billion years, which is very close to the estimate. However, the Puranic calendar claims that of those 4,32 billion years, by now around 2 billion years have passed in our present cycle of creation or about half a day of Brahma. Is it possible that some western scientist took inspiration from the Puranas but mixed up the lifespan with the present age?

I hope and wish that this book by Ganesh Swaminathan inspires more Indians to take interest in and study the Puranas. 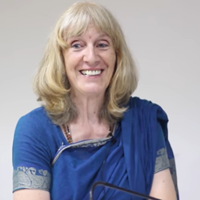 About the Author
Maria Wirth is a German who came to India on a stop over on her way to Australia after finishing her psychology studies at Hamburg University. She visited the Ardh Kumbh Mela in Haridwar in April 1980 where she met Sri Anandamayi Ma and Devaraha Baba, two renowned saints. With their blessing she continued to live in India and never went to Australia.

She dived into India’s spiritual tradition, sharing her insights with German readers through articles and books. For long, she was convinced that every Indian knows and treasures his great heritage. However, when in recent years, she noticed that there seemed to be a concerted effort to prevent even Indians and the world from knowing how valuable this ancient Indian heritage is, she started to point out the unique value of Indian tradition also in English language and shared them on her blog. She also wrote the book Thank you India – a German woman’s journey to the wisdom of yoga.

From the Beginning of Time

the Puranas by Ganesh Swaminathan