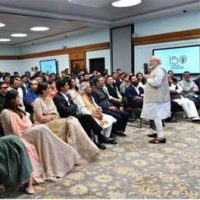 Taarak Mehta Ka Ooltah Chashmah is one of the top 5 shows on Indian television and has completed 2800 episodes. In discussing the meeting the PM, Mr. Asit Kumarr Modi, creator of the show and Founder of Neela Tele Film, said, “Taarak Mehta Ka Ooltah Chashmah has been an ambassador of the Swachh Bharat campaign. Through the show, we raised awareness on the importance of cleanliness and Gandhiji’s thoughts and principles. Now, we have even made a coffee table book based on the campaign which was showcased during this meeting and was appreciated by everyone.”