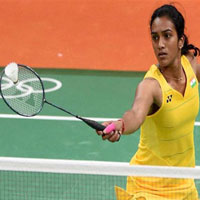 She will take on Ji Hyun Sung of South Korea. Both players have met 9 times in the past, with Sindhu leading the head-to-head record, 6-3. She has won the last two games played against the Korean.

Sindhu had stormed into the last-4 yesterday after beating world number one Carolina Marin, whom she lost to in the Final of the Rio Games.

Sindhu is the only Indian who had qualified to the tournament. Only the top-eight ranked players in the Dubai Rankings make the cut to the competition.