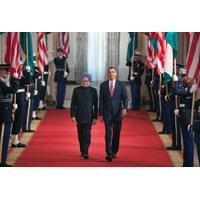 During a week when Americans gave thanks, President Obama hosted Indian Prime Minister Manmohan Singh for an official state visit, the highlight of which was the administration’s first state dinner. Prime Minister Singh and a delegation of government officials and business leaders arrived in Washington D.C. the week of Thanksgiving for a five day trip prepared to discuss Afghanistan, climate change, clean energy, and nuclear cooperation among other things. Prior to the Prime Minister’s visit, Indians were ambivalentabout the administration’s view of the US-Indian relationship, particularly in light of a focus on relations with China. Concerned about a shift in priorities, many Indians believed the visit simply to be a formality and one that would not end in any notable actions. However, after five days of meetings, Prime Minister Singh’s second visit to the United States appeared to be more than just a series of meet-and-greets. In choosing India as the first state visit of his administration, President Obama has shown the importance of developing a stronger partnership with the world’s largest democracy.

Top Indian government officials who were part of the delegation included External Affairs Minister S.M. Krishna; National Security Adviser M.K. Narayanan; Special Envoy on Climate Change Shyam Saran; Foreign Secretary Nirupama Rao, and Indian Ambassador Meera Shankar.The state dinner honoring Prime Minister Singh and his wife, Mrs. Gursharan Kaur, took place on the South Lawn of the White House with a view of the Washington Monument. Though most state dinners tend to occur in the State Dining Room, a room reminiscent of colonial times, this event was held outdoors under a pavilion to accommodate the large guest list. Notable guests included General Colin Powell, Governor Bobby Jindal, Senator John Kerry, Secretary of State Hilary Clinton, Aneesh Chopra, Vivek Kundra, and Indra Nooyi among others.While rain was likely not what the White House had in mind as an ideal backdrop for a state dinner, the glittering lights and elegant décor made the tent breathtaking.

Chandeliers suspended from the ceilings and white floating candles in glass vases lined the tent walls bringing sophistication to what might have been a dreary setting. The tables were set with bright apple green linens and traditional, gold-rimmed china from the Eisenhower and Clinton administrations. Bold, vibrant flowers in shades of purple were placed on each table. The flowers were meant to represent and honor the state bird of India, the peacock. The White House culinary staff was challenged to create a menu fit for a state dinner and one sure to please the vegetarian Prime Minister. The White House executive chef was joined by chef Marcus Sameuelsson, who assisted at the request of the First Lady Michelle Obama. The menu, a melding of American and Indian flavors, consisted of a range vegetarian options including several salads, a lentil soup, a green curry, and potato dumplings in a tomato chick pea sauce.

ptions reflected traditional American favorites including a pumpkin pie tart and a pear tatin. Before the dinner began, President Obama welcomed the guests with a warm greeting – “Aapka Swagat Hai,” which means, “you are welcome.” In his toast, he once again expressed the importance of strengthening the growing relationship between the U.S. and India. President Obama quoted Nehru to fully convey the administration’s desire to move relations with India forward. Prime Minister Singh then thanked the President and First Lady for their hospitality. He used a quote from Abraham Lincoln to applaud President Obama’s achievements. The Prime Minister echoed the President’s sentiments regarding the need for strong ties and continued discussions between the two countries. Guests were treated not only to elegant food and stimulating conversation, but also to an eclectic range of entertainment.

A. R. Rahman, famed musician and artist who wrote the music for Slumdog Millionaire, was invited to perform with Chicago native and American Idol participant Jennifer Hudson. The National Symphony Orchestra and the United States Marine Band also performed. The symbolism in choosing to host India for the first state visit of this administration was not lost on most. Both President Obama and Prime Minister Singh recognized and embraced the values both the United States and India share – democracy, rule of law, pluralism, and new opportunities. While the memorable evening eventually came to a close, the ties these two nations share will continue to strengthen and grow.