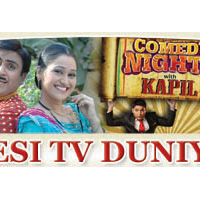 The latest contestant booted from Bigg Boss 9-Double Trouble, Rimi Sen, was on cloud nine after coming out of the house, which she described as nothing less than a jail. She thanked her fans in helping her leave the house, which turned out quite different from her expectations.

She said that the experience trained her in living with unknown people and even cooking. It made her a much more independent person. According to her, neither Mandana Karimi nor Rochelle Maria Rao deserved to win while Kishwer Merchant was the most deserving candidate.

Dhani and Viplav to get marry in Ishq Ka Rang Safed

The upcoming episodes of the Color’s daily soap Ishq Ka Rang Safed will see plenty of dramatic twists with Tripurari’s negative streak fully flaunted. The current storyline of Tripurari marrying Dhaani will take a dramatic turn when Viplav learns of Tripurari’s evil intentions. Viplav will soon learn about Tripurari’s murdering attempt of Suvarna and her unborn child so that he could marry Dhani and fulfill his evil intentions. But every plan will go haywire when Viplav appears in the final leg of the wedding rituals and fills Dhaani’s maang with sindoor himself.

On her current show on Zee TV, Ek Tha Raja Ek Thi Rani, Drasti Dhami is all set to enthrall all with her new look in warrior attire. According to sources, Gayatri will sense new trouble ready to enter Ranaji’s life. To combat it, she assumes charge and battles it out. She does so by donning a new look that heavily draws inspiration from the Mastani’s character of the upcoming Bajirao Mastani.

Sony Entertainment Television’s courtroom drama serial went off the air in spite of being extremely popular. A few months after its end, buzz is running wild that the show is planning a comeback with a new season. The immense popularity of the show is influencing the makers of the show to think of a new season.

If all talks and basics fall in place, shooting for the show would start soon. When contacted for comments, the show’s lead character, Ronit Roy stated that the talks were currently on, but nothing has been confirmed so far.

Arjun Bijlani will make a comeback as Shekhar in Color’s popular show, Meri Aashiqui Tumse Hi. His earlier stint was quite popular, but he had to make an exit due to a change in storyline.

Now that Ranveer has landed in jail after falling prey to the evil plot of his long lost twin brother, Shekhar will re-enter the scene and go all out to defend Ranveer and prove him innocent. Shooting for his upcoming episodes is already underway.