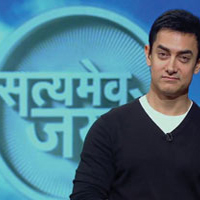 Satyamev Jayate is recognized by CNN-IBN

On December 19, Satyamev Jayate bagged the ‘Indian of the Year’ award by none other than the prestigious CNN IBN, which recognizes credible contributions in the field of national development. For being the most influential, real to life and perhaps, the most sought after reality show, the team of the Satyamev Jayate was finally acknowledged for its innovative thought bubble.

The award came soon after the show’s popularity and much talked about appreciation by the Government of India and the National commission for schedules castes, where the latter lauded the efforts of the show for promoting awareness about the social discrimination.

Uday Shankar, Star India CEO, along with the entire crew of the show, including the admired actor, Aamir Khan, was given the award for their efforts in brilliantly showcasing the social and emotional ills that plague the Indian society today. The show was also nominated in the ‘most influential entertainer of the year’ category of awards.

Big B becomes Santa on KBC

There is perhaps no gift better than the gift of smile to give away this Christmas. That is what our very own Big B will be doing on KBC this Christmas!

At the request of a little contestant, the living legend of Bollywood, will play Santa and fulfill the little girl’s wish by doing a little jig on Kajra re. The little girl, Muskaan, requested him to dance to the famous bollywood number, to which our own ‘Vijay’ could not muster a no. The result was a foot tapping dance, with a round of applause from the contestant and the seated audience. The show will also be witnessing a troupe of little children, who will be choiring Christmas carols on the KBC platform.

The most sought after comedy soap on Sab channel goes for a 15-year-old jump in almost a minute. The show recently replaced its female protagonist Daya now is played by Simple Kaul. After the replacement, the show plans to go ahead into the future.

However, there is a little surprise element hidden in there and that is imagination comes in. Yes, the 1- minute imagination of Bapuji will show all the characters after 15 years. The best part is that the imagination will be just for a minute, when the old man will be jolted from his daydream.

The wild imagination will happen as a result of the ruckus created by a Kashmiri girl, who will claim to be Jethalal’s first wife. The only problem is that Bapuji seriously takes up the issue and he ends up daydreaming about the troubles, with a 15-year time span.

Star Parivaar has another reason to celebrate when its new channel, LifeOk, turned a year old. The channel was started by Star a year ago, with the intention of reaching small towns, with small advertisements in-between the programs. In spite of average TRP’s with some programs and relatively less popularity than the rest of the Star channels, LifeOk channel managed to sail through.

Irrespective of its average ratings for some programs, the channel managed to grab the attention of viewers, including those who reside in metro areas. Some actors playing prominent roles in some of the soaps were quite ecstatic about the channel’s first birthday.

Mouni Roy, featuring in Junoon-Aisi nafrat toh kaisa pyaar on LifeOk, was quoted saying that the channel had great potential and future ahead. She has worked with Star Parivaar and hopes to stick to their baby channel in all its future endeavors.