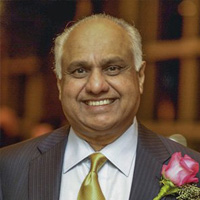 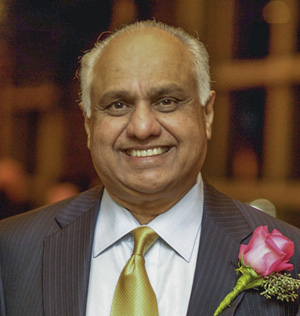 Dr. Ramanuja Iyengar was born in Karnataka and graduated from Mysore Medical College. He came to the US in 1966 to pursue post-graduation education and training in Internal Medicine and Cardiology. After completing a cardiology fellowship at the University of Miami, he taught at their same medical school for before taking a position as Chief of Cardiology at St. Francis Hospital in Miami Beach. He practiced for more than 25 years, and considers himself fortunate to have had a successful career as a physician, because it enabled him to use his finances for community projects and philanthropic efforts. He says “Success means getting the best education and striving to be the best in any profession you chose.” 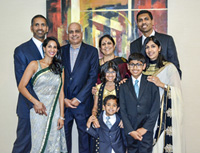 Dr. Iyengar and his wife, Revathi, make it their priority to serve the South Florida Indian community. He attributes his sense of dedication to service to his good upbringing, strong belief in God, and commitment to doing his best for his family. Dr. Iyengar’s parents were his biggest inspirations. His father was an Ayruvedic doctor in a small town ho served patients without expectation, and his mother was always encouraging in his studies. Dr. Iyengar and his wife are blessed with two sons and three grandchildren.

He is currently heading the construction effort to build a traditional Shiva Vishnu Temple of South Florida, where he is also a trustee for life. In addition, he assisted with the total renovation of an ancient Lakshimi Narasimha temple in his hometown. He received an appreciation award from that temple in 2011.