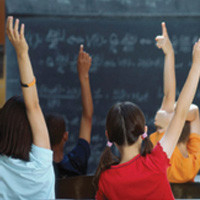 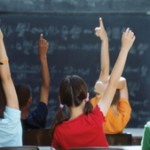 The prowess of Indians in the field of higher education, especially in disciplines like mathematics, has taken a fabled shape by now. In almost every western college or university, it is a common sight to find an Indian name among the top three students. The situation has become so intimidating that President Barack Obama has urged Americans to raise their standards of education in order to compete with the students of India.

While acknowledging Indian talent in this area, a common question that comes to mind is what do Indians have that the others lack? Some say it’s their history, some ‘blame’ it on genes and for others, upbringing and family values that inculcate an attachment for quality education among the Indians.

If you first talk about history or tradition, India surely has got loads of it. Education in India has a history stretching back to the 3rd century B.C. The tradition began from the days of yore, when monastic orders of education under the supervision of a guru were a favored form of education for India’s noble castes. A definite caste based pattern of receiving education dominated those days. The priest class, the Brahmans, was imparted knowledge of religion, philosophy, and other ancillary branches; the warrior class, the Kshatriya, was trained in the various aspects of warfare; and the business class, the Vaishya, were taught their trade. Thus all sections of the population had received some form of education at a given point of time.

Apart from monastic orders, institutions of higher learning and universities flourished in India well before the Common Era and continued to deliver education into the Common Era. Secular Buddhist institutions cropped up along with monasteries. Again, a number of urban learning centers became increasingly visible from the period 200 BC to 400 AD. The important urban centers of learning were Taxila and Nalanda, among others, which imparted knowledge and attracted a number of foreign students to study topics such as logic, grammar, medicine, metaphysics, and arts and crafts. By the time of the visit of the Islamic scholar Alberuni (973-1048 AD), India already had a sophisticated system of mathematics and science in place and had made a number of inventions and discoveries.

Mathematics is, in fact, a field where an Indian supremacy was established centuries ago. Since the Vedic ages, the country has been blessed with mathematicians who turned the course of the country’s education. Stalwarts like Manava and Panini (Vedic age); Aryabhatta, Bhaskara I and II, and Bhrahmagupta (500 BC – 1100 AD); Madhava of Sangamagramasome, Kamalakkara and a host of renowned mathematicians from the Mithila school and Navadwipa School (1100 – 1800); Srinivas Ramanujan, A. A. Krishnaswami Ayyangar, Prasanta Chandra Mahalanobis, Satyendra Nath Bose, Subrahmanyan Chandrasekhar, S.S. Abhyankar and a host of others (1800 onwards) are worth mentioning.

While discussing the traditional expertise of Indians in education and mathematics, how could one deny that it is the land where the concept of zero as a number as well as the decimal number system was discovered? Not only these, but also systems of algebraic abbreviation, binomial co-efficient, differential equations, Pi as an infinite number, Pythagorean theorem and even the discipline of Trigonometry originated in India and then travelled across the world. So, for a country, which is so rich and blessed wit talent, there could certainly be an explanation that its sons and daughters have a natural inclination towards education. It is not without any reason that the legendary Albert Einstein commented, “We have to be grateful to the Indians for teaching us how to count, without which no worthwhile scientific discovery could have been made.”

With tradition and history at their end, there is one more thing that makes the Indians stand out in the field of education including mathematics. It is the Indian culture and value based education system that imbibes a strong focus towards studies from the very childhood. 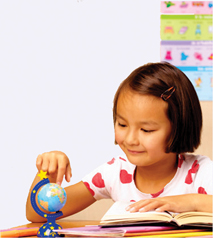 For the average Indian, the formative years are always centered on education. The social system is such that studies are given supreme importance during childhood. Right from the age of two or three, once a child is put into school, it becomes the sole objective of the parents to ensure that their kids not only get quality education, but also that they put in their best efforts to attain a position of prominence in their studies. It is seen that for this purpose, Indian parents go out of their way to arrange for the best possible resources for their children as far as education is concerned.

Moreover, the otherwise conservative upbringing of Indians does not provide much scope for other activities and hence, indulging in things like going out, parties, etc. are much less in comparison to what we see in the West. As a result, youngsters’ concentrate mainly on studies, which thus provide a natural platform for academic excellence in the days to come.

At the same time, a sense of competitiveness is often inculcated within Indian minds during their formative years. Competition from classmates or within the school frequently acts as a source of motivation for the students, who take it as a challenge to show his or her mettle among the lot. No doubt that this trait often backfires and affects the mental health of young learners in some case, but in general it helps one to put in his best efforts.

The overall standard of studies that the Indian education system follows is also an important factor that contributes to superior Indian talent. It is often observed that topics that are taught in the West at the middle school level are included in the curriculum of primary schools in India. Moreover, Indians learn their subjects in a much comprehensive way, as teachers go into depth of each topic thus providing a better base for their students. As a result, the average Indian student has an inherent upper hand when compared with others, as he has not only learned more in comparison, but also has learned in greater detail.

Another important reason happens to be the lesser reliance of Indian students on technology. From the very early days, Indian students were not allowed to take assistance from any gadgets like calculators and hence, it becomes a very healthy habit for them to do all their calculations manually. This sharpens analytical skills, hones logical reasoning and gives students a perennial upper edge.

The sum product of these attributes, coupled with the rich educational tradition of India possibly translates into the above average Indian brain that the entire world looks up with respect and awe. There may not be any scientific validity to Indian supremacy, but then often facts belie logic.