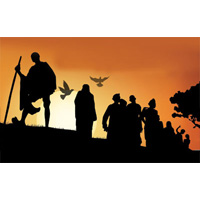 Gandhi Conquers Yet Another Land 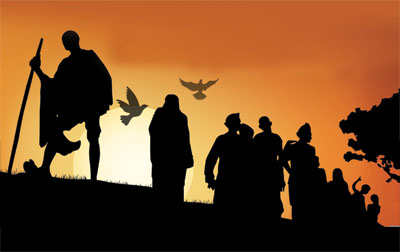 In this day and age, we are all trying to firmly keep hold of what is important. Whether it is our family and loved ones, possessions and belongings, or even our ideals and principles, everyone needs an anchor. It is perhaps more relevant to us all because we seem to have lost the ability to control our surroundings, and to a certain degree, even our lives. More importantly, the unrest that is rampant around us necessitates a calming balance that we can all do well with.

While we all think back to how life seemed easier in years past, some look at it with skepticism and others with awe. Then, perhaps people had concrete ideas about life and its qualities. Today, we view life in a more sophisticated way, but few of us think about the quality of life that comes from within ourselves.

We all want change. No one individual is entirely satisfied with the status quo or does not want life to shape up differently. Introspection and a true quest will show us that change really needs to begin with ourselves. This is where Gandhian philosophy comes to play.

There are several things that one can draw from Gandhi apart from inspiration. What makes Gandhi and his philosophy appealing that his ideologies find place anywhere in the world and can never be dated or out of style.

Gandhi followers around the world have done their best to emulate his humanitarian efforts. There are several great human beings who have made a significant difference, but no one has quite managed to make an impact as Gandhi did. His lived a life that made everyone sit up and take notice, managed to make more noise with stoic silence, and created a sensational stir without raising so much as a single stick in defiance enabling a single-handed victory over the most powerful enemy of the state.

So what if we are not threatened as a state today? What if our independence is not what is at stake? In reality, our potential loss is much greater today. Many have succumbed to the perils of transient gains and gambled away some part of our souls in some form. Whether in pursuit of fame and prosperity or the race to get succeed, we sometimes end up sacrificing, and in some cases, compromise on what seems right. Though we can rationally justify many of our actions, only our conscience knows the truth. Gandhi gave his entire self away to a cause greater than his own good, one that had little to offer him, and one that took his life. 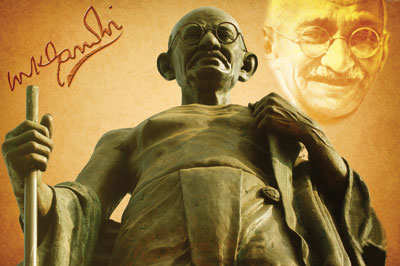 Gandhi inspired not just India’s independence, but also several other freedom struggles around the world. He has transcended from being just the Father of the Indian Nation to being the Father of Humanity, one who guided many to find a purpose and path in life. Several stalwarts, including profound thinkers and national leaders find inspiration in Gandhi and strive to emulate his ideologies.

Just a few weeks ago on the day that marks his birthday, a large statue of Mahatma Gandhi was unveiled at Falcon’s Lea Park in Davie, Florida. A large area has been dedicated giving the place of prominence, with a location so strategic; it affords most passerby a good look.

This is not the first statue of Gandhi to be placed in America. This statue will join others that are located in major cities San Francisco, Houston, Atlanta, Chicago, New York and Washington, DC. The statue in Florida will, however, be the largest memorial that includes the statue and the half-acre plot which will constitute Gandhi Square. The size is not the only aspect making this special; the design is also planned in a way to reflect Gandhi’s teachings and his character.
Instating the statue of Gandhi goes to show the kind of respect he has garnered, and also reflects how the Indian and American cultures have grown and nurtured one another harmoniously. With the contributions Indians have made towards America’s growth, and the fact that America has helped shape the destiny of thousands of Indians, it is clear that both communities have found a common purpose through the statue of Gandhi.

The teachings of Gandhi have brought about monumental changes in several countries through his pillars that include truth, non-violence and universal love. Just as one man conducted a revolution that made the world take notice, it is clear that the world could do with many more individuals like him who can pursue what is right.

It is important to understand that we must not let the statue confine itself to being an acknowledgement and tribute for what Gandhi has brought to our life. Instead, it should serve as a constant reminder of what we can achieve with his simplistic ideals.

The need of the hour is change. It is only when change occurs at the individual level that we can warrant larger changes in society. While it may be difficult for all of us to become embodiments of Gandhian wisdom, we should take to heart one principle and follow it fully to make a considerable difference.

Let us vow to pursue the Gandhian pillar within ourselves, and be the change that we would like to see. While we all want to see change that may be large and impossible to achieve alone, it is only when we reflect the change that others will start to follow suit. Who knows, with time we may finally live in a world that puts trust over nuclear weaponry.