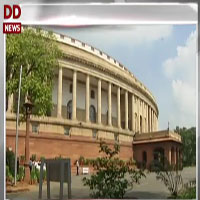 Crucial GST bill to come up in Rajya Sabha tomorrow as broad consensus emerges between government and opposition. BJP issues whip to all its Rajya Sabha members to be present in the house for next 3 days.

The long-pending GST Bill has been listed for consideration and passage in Rajya Sabha on Wednesday amid strong indications that the most far-reaching indirect tax reform in independent India would be supported by Congress and all other major political parties.

BJP has issued a whip to its members asking them to be present in the House for the next three days during which it expects the legislation to be passed.

Passage of the GST bill will ensure a single indirect tax regime throughout the country which will benefit the common man and the economy.

The Government expects to bring GST into effect by April 2017.

Centre is ensuring all bases are covered in its strategy to get the GST bill passed.

All stops are being pulled to see that the constitutional amendment related to the GST passes muster in Rajya Sabha.

Finance Minister Arun Jaitley has been meeting Congress and other opposition leaders regularly to ensure consensus over the bill.

Govt has now listed the GST bill for discussion and passage on Wednesday.

BJP has issued a 3-line whip to all its Rajya Sabha members to ensure their presence in the house during the next 3 days, a clear indication that the govt wants the GST bill to be passed in that period.

Cabinet cleared some changes in the constitutional amendment bill last week which seems to have cleared the way for its passage.

The govt has accepted 1 out of the 3 changes sought by the congress and has been making consistent efforts build consensus on the altered bill.

Govt made renewed efforts to eliminate opposition’s objections to it ahead of the monsoon session and get the bill passed.

Passage of the GST bill will ensure a single indirect tax regime throughout the country which will benefit the common man and the economy..Govt wants to bring GST into effect by April 2017.