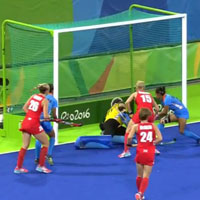 Indian women’s hockey team could not produce the performance of their opening match against Japan as Great Britain convincingly overpowered them 3-0 in the second match of the Olympic Games in Rio de Janeiro last night.

After a cautious first quarter, the English women who are the London 2012 bronze medalists, unleashed their fury by scoring within two minutes in the second quarter.

Giselle Ansley pierced through captain Sushila Chanu and goalkeeper Savita Punia to sound the board with a powerful dragflick breaking the deadlock in the 25th minute.

Before the Neil Hawgwood-coached team could settle down, it was Nicola White whose deft strike made it 2-0.

The third half too went against India with Alex Danson making it 3-0 in the 33rd minute with some effortless dribbling as Indian women had no answer to them.

The strategy was to hold the possession and start attacking from the second quarter.

A couple of times Vandana Katariya looked to get going, but just lacked that ability to pull away from the physically stronger British players.

The first quarter however looked different with India putting up a solid defence as they went on to impress in the last 15 minutes against the two-time bronze medalists.

Indians were reduced to 10 playes with five minutes to go as Deepika Thakur was yellow carded but they ensured that there’s no further damage by putting up a solid defence.

India, who drew against Japan 2-2 in their last match, next face Australia (August 10), the USA (August 11) and Argentina (August 13) in their remainder league matches.