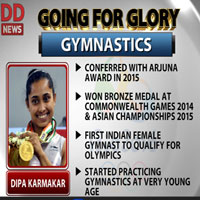 Gymnast Dipa Karmakar became the first Indian to make the cut for the individual vault finals in her debut Olympic Games after finishing 8th in the qualifying round at Rio de Janeiro.

The Tripura-girl, who is the country’s first woman gymnast to qualify for the Olympics, managed to perform her much-appreciated ‘Produnova’ vault cleanly to secure 14.850 points after two attempts.