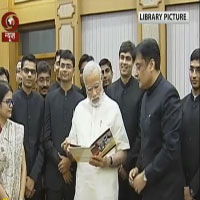 These officers of 2014 batch started their career as assistant secretaries in 48 Central Government departments on Monday.

This is the second batch of IAS officers to have their first stint in the Central Government instead in their respective cadre states.

They will work with the departments concerned for a period of three months.

Last year as well, as many as 158 IAS officers of 2013 batch were appointed as assistant secretaries in different ministries as part of a first-of-its-kind initiative by the Union government to groom bureaucrats at the Centre before they move out to their respective state cadres.