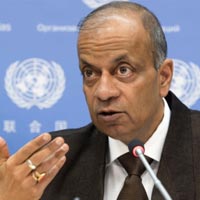 Antonio Guterres, the Secretary General at the UN has decided to extend the term of some officials in the UN. In the list, features Atul Khare who is presently serving as the Under-Secretary for field support. He holds the highest rank in the UN as an Indian Civil Servant. His tenure has been extended by one year till April 2018. The announcement was recently made on February 16.

Khare is a doctor by profession. He joined the Indian Foreign Services in the year 1984. Since then, he has played crucial roles in the United Nations and held several important positions. He mostly contributed to the peace making process and has come up with an idea to collect funds at the UN for the sex abuse victims.

Currently, Khare holds the profile of the Under-Secretary General for field support. His key roles include reducing the cases of sexual abuse and exploitation scandals in the UN peace making process. Khare was appointed in UN in the year 2015 as the Head of Field Services. Initially, his roles were to provide administrative, logistics and human resource support to the UN peacemaking process and political missions across the globe. He adopted zero tolerance policy against sexual abuse and scandals. Khare will therefore maintain his rank for another year till April 2018.

Guterres after checking the portfolios and clean chit record of the officials has decided that all officials who are actively involved in the peacemaking process and served as pillars to UN, their tenure will be extended by a year. It includes key officials like Atul Khare and Jeffrey Feltman. He also has appointed new women officials at the UN this time to reduce the cases of sexual exploitation and scandals. The newly appointed women officials include Amina Mohammad of Nigeria and Maria Luiza Ribero Viotti of Brazil.