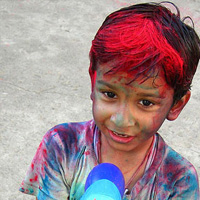 HOLI – The Festival of Colors 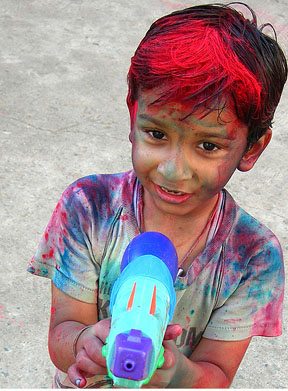 Of the numerous festivities in the Hindu calendar, Holi is undeniably the most cheerful and lively fiesta that not only celebrates the victory of the good over evil, but also signifies a riot of colors. Celebrated with the advent of spring, Holi, also known as ‘Vasanta Mahotsav’ or ‘Phagwah,’ is accompanied with untainted bliss and delight, fun and frolic, music and dance, and certainly plenty of vivid colors!Holi is also known as the ‘Vasanta Mahotsav’ as it venerates the fertility of land and good harvest after a parched and futile winter. It is also called ‘Phagwah’ as the festival is celebrated during the Hindu month of ‘Phalgun’ that ushers in spring in India with the sprouting of seeds and blossoming of leaves and flowers on the trees. The festivities begin 10 days ahead of the full moon and culminate on the full moon day.

The expression Holi is derived from the Sanskrit word ‘hola’ that denotes offering prayers to the Almighty thanking him for an abundant harvest. Apart from spreading the message of unity, universal brotherhood, and amity, the festival is reminiscent of the fact that the Almighty shall protect all those who love Him, while people who torture His followers would be punished and reduced to ashes like the evil mythical character, Holika.

Vedic or Hindu mythology relates Holi to a Puranas story that is related to Holika, who is the sister of devil-king Hiranyakashipu. According to the story, Hiranyakashipu punished his son, Prahlad, in different ways to compel him to condemn his ideologue Lord Narayana. Having been unsuccessful in all his endeavors, Hiranyakashipu eventually directed his sister Holika to take Prahlad in her lap and enter a blazing fire. As Holika received a boon that she would always be untouched by fire, she obliged her brother. Little did Holika realize that the boon finished following her utmost transgression against the Lord’s devotee! Subsequently she was reduced to ashes in the fire, while Prahlad remained unscathed by the blaze.

Holi is also known as the ‘Kama Mahotsava’ and is associated with the divine dance ‘Raaslila’ by Lord Krishna with his female devotees called Gopis. In south India, Holi is known as ‘Kamadahana,’ the day on which Cupid was burnt by Lord Siva. In north India, people play Holi joyfully with ‘gulal’ (colored powder) and colored water.

Holi has various elements in a Vedic religion follower’s life, social, religious, and sacrificial. On the day of the festival, Hindus cleanse their homes, do away with all filthy articles from around the house and consign them to the flames, thus destroying all disease-breeding bacteria improving the hygienic state of their locality. Unlike many other Hindu or Vedic festivals, during Holi, people sing and dance about in the streets, play practical jokes with passers-by, and a bonfire is ignited at the conclusion of the festival. Even games depicting the frolics of the young Lord Krishna take place joyously around the bonfire. People believe that the bonfire will render their homes pure and their bodies free from malice and all diseases.

The religious element of Holi comprises worship of Lord Krishna and in some places like in eastern and northeastern India, the festival is also known as ‘Dol Yatra.’ The word ‘dol’ literally means ‘a swing’ and signifies an image of baby Lord Krishna placed in a little swing-cradle decorated with flowers and painted with ‘gulal’ (colored powders). Devotees chant hymns praising Lord Kirshna and his deeds, while Holi songs highlight his frolics with the Gopis (milkmaids) of Vriandavaan. Children also enact the innocent cavorts of little Lord Krishna with the Gopis.

Holi also has a social element and that is the uniting or embracing of the great and the small, of the rich and the poor, and the uniting of equals. Although a festival of colors, Holi preaches the great ideology “let the dead bury the dead” and teaches the people to forget all the ill feelings of the past and begin life anew with love, sympathy, co-operation, and equality. The festival also edifies the feeling of oneness or unity with one’s self too.

Another aspect of Holi also means ‘sacrifice.’ It teaches people to set ablaze all anomalies of the mind, including egoism, vanity, and lust, through the flames of devotion and knowledge. The festival also helps to enlighten people with cosmic love, mercy, generosity, selflessness, truthfulness, and purity through the fire of yogic practice, symbolized here by setting fire to the ‘Holika.’ The real spirit of Holi is to rise from the morasses of inanity and irrationality and dive deep into the ocean of spirituality.

Hence the ideology of Holi is to always keep the light of God’s love blazing and shining in the hearts of devotees. Holi may also be described as the enlightenment of the heart! The spring season is the expression of the Lord and according to the Bhagavad Gita, Holi is said to be the Almighty’s heart.