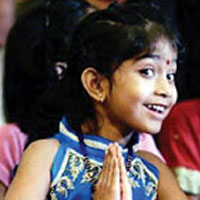 How to raise Hindu Children in the USA

How to raise Hindu Children in the USA

Living as a Hindu here in the USA, parents must keep a watchful eye on what their kids are being exposed to. There is a different dominant faith here and, as we all know, not all their values resemble ours.

Here, I constantly hear the words, Fear of God, words that I never heard in India. I never had any reason to fear any of the Hindu Gods; even Durga is affectionately called Ma Durga. But then it slowly dawned on me that abrahamic faiths view God differently, as a King or Master. That’s when other words started making sense, words like Sin and Punishment. A King or master cannot afford to have democracy under his watch. It is very important for a King to have his subjects follow his orders without discussion in order to be successful. Hence he issues commands and laws. He is also a male, more likely to issue brutal orders. Hence the admonition that if you are not of his faith, you are going to hell! On the Day of Judgment there are other threats! If you don’t convert to this faith, you will be killed. But this view makes them subjects, servants, or even slaves.

Hinduism on the other hand teaches us to be devotees of God; we are children of God and so should behave appropriately. We should never teach fear of God to our children. God is our Parent, our teacher; hence, God should be viewed with love and respect not fear and obedience. A Parent does not issue commands or laws, a teacher instructs, and it is up to you to learn. A Parent has no favorites, all her children are equal in her eyes, and she never gives up on anyone, even the wayward ones.

Most Hindus stand straight or sit in front of God in the temple; some prostrate themselves, a practice, which should be discouraged. A Hindu must never kneel before God, for that is the lower position of a subject before his king or a slave before his master. Hindus must act like devotees or children of God and must conduct themselves in such a manner.

There is also no place for Hell in Hinduism. God is not a torturer, period! Secondly, if we are reborn and have to suffer the consequences of karma from the actions of our previous life, doesn’t that make hell redundant? Otherwise we are being punished twice. And the word punish also sounds more like what a King or master would do. A parent guides her children into the right path with love and affection; we need to learn her lessons in our current life. The lessons that we learn in each life are our stepping-stones to Moksha. Hardships in life should be viewed as God’s teachings not as punishments.