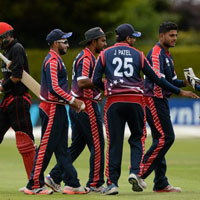 The International Cricket Council (ICC) has confirmed that the ICC World Cricket League Division 4 tournament will be played at Woodley Park, Los Angeles, from 29 October to 5 November 2016.

Host USA will be joined by Bermuda, Denmark, Italy, Jersey and Oman in the six- team tournament, with the top-two sides advancing to the ICC WCL Division 3.

Jersey and Oman were promoted from the WCL Division 5 competition held in Jersey in May this year. Jersey was the champion and Oman came in second.

Denmark and Italy retained their spots in Division 4 after finishing third and fourth respectively in WCL Division 4, 2014 held in Singapore, where Malaysia was the eventual winner.

USA and Bermuda dropped down from WCL Division 3 after they finished as the fifth and sixth teams in the tournament held in Malaysia in 2014.

This is the first time an ICC WCL divisional event will be played in the USA.

The full schedule, squads and match officials for the tournament will be released in due course.