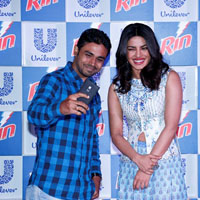 Stunning actress Priyanka Chopra, sang the RINJai Gangaajal Anthem’ as a tribute to crores of Indian women at an event organised by RIN. The brand recently ran a contest for its consumers and organised a meet and greet for 5 lucky winners, giving thema chance to tête-à-tête with the Bollywoodsuperstar.

RINin association with Jai Gangaajal launched the special anthem on Women’s Day this year.Priyanka Chopra featured in an empoweRINg music video launching the anthemto applaud the courage, shine and honorof the Indian women. The actress portrayed her character from the movie with an unbeatable spirit, as a mark of respect to women of strength.

Speaking on the occasion, Mr. Vipul Mathur, Category Head Core Laundry, HUL said, “RIN as a brand has always believed that everyone is talented and more often than not it is lack of opportunity or prejudices of others that stand in the way. There are so many women around us, who fight these biases and emerge victorious. Associating with a women empoweRINgfilm like JaiGangaajal and a role model like Priyanka Chopra, was the best way for RIN to honor the true spirit of women. “

Speaking about the association, Ms. Priyanka Choprasaid, “The Rinanthem is close to my heart and I am proud to be a part of this association. The Rinanthem resonated the essence of the film and became a perfect fit for the film.”

Talking about Jai Gangajal RIN anthem Mr. Prakash Jha said, “The Rin anthem resonated the essence of the film and became a perfect fit for the film. Both me and the music directors- Salim-Sulaiman loved to work on it and are very proud to have this association with Rin Detergent”

RIN launched the anthem on the occasion of International Women’s Day and saw #JaiGangaajalRINanthem trending on 2nd position in India.