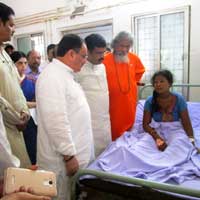 The two ministers met patients at AIIMS, Bhubaneswar, AMRI Hospital and KIMS Hospital. They will also visit Sum Hospital where a fire had killed 20 people on Monday evening.

Stating that the Centre would take measures to ensure better treatment of the fire-hit patients, Nadda said a fresh advisory will be given to all the states so that such incidents do not take place in future.

Addressing media after the hospital visit, Petroleum Minister Dharmendra Pradhan said the state government will soon submit a report on the inquiry into the mishap. The minister added that the guilty will be punished.

Four officials, including the Superintendent, of a private hospital have been arrested while four employees have been suspended in connection with the massive blaze that claimed 20 lives and left many injured.

Meanwhile the NHRC has issued a notice to Govt of Odisha the Bhubaneswar hospital fire.