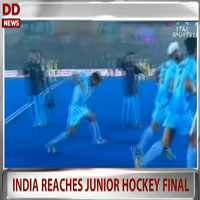 India beat Australia 4-2 on penalties, after the two teams were locked 2-2 at the end of the 70 minutes, to enter Junior Hockey World Cup final.

The hosts will now meet Belgium in the title clash on Sunday.

India played their best game of the tournament against Australia and came back from behind to take the lead in the second half before Australia fought back to level the scoring.

For India, Mandeep and Gurjant scored in the second half while Sumit, Harmanpreet, Harjeet, Manpreet found the back of the net in the shootout.

Vikas Dahiya was the star performer for the hosts as he made crucial saves in the shootout and allowed Australia to score only two goals.