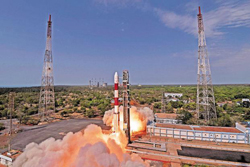 The lift-off of PSLV-C40 occurred at 0929 hrs (9:29 am) IST from the First Launch Pad. After a flight lasting 16 minutes 37 seconds, the satellites achieved the polar Sun Synchronous Orbit of 503 km inclined at an angle of 97.55 degree to the equator. In the succeeding seven minutes, Cartosat-2 series satellite, INS-1C and 28 customer satellites successfully separated from the PSLV in a predetermined sequence.

The fourth stage of PSLV-C40 fired twice for short durations to achieve a polar orbit of 365 km height in which India’s Microsat successfully separated.

After separation, the two solar arrays of Cartosat-2 series satellite deployed automatically and ISRO’s Telemetry, Tracking and Command Network (ISTRAC) at Bengaluru took over the control of the satellite.

In the coming days, the satellite will be brought to its final operational configuration following which it will begin to provide remote sensing data using its panchromatic (black and white) and multispectral (colour) cameras.

The 11 kg INS-1C and the 100 kg class Microsat, the two Indian co-passenger satellites of Cartosat-2, are also being monitored and controlled from ISTRAC, Bengaluru.

The 28 international customer satellites belong to Canada, Finland, France, Republic of Korea, UK and the USA.

So far, PSLV has successfully launched 51 Indian satellites and 237 customer satellites from abroad.