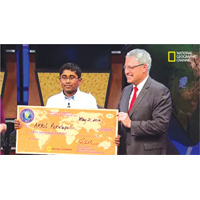 “Arise, awake, and stop not until the goal is reached” – Swami Vivekananda said, and Dr. Ratnam Chitturi took it to heart and initiated a journey to provide financial help towards the college education of economically backward students in India. To achieve this goal, North South Foundation (NSF) was founded and later became a platform for more than one hundred thousand children of Indian origin to compete in different areas of academics in more than 85 centers across the United States and over 25 centers in India. Dr. Murali Gavini founded the Spelling and Vocabulary Bees at NSF during 1993-94. Over the years, the contests were expanded to include Math, Science, Geography, Brain Bee, Essay Writing and Public Speaking. Every year, top scorers among all local chapters come together for national finals at a major university. Starting in first grade, the contests lay a strong foundation for children to improve their learning skills and compete in mainstream major league competitions designed for middle school children in the United States. 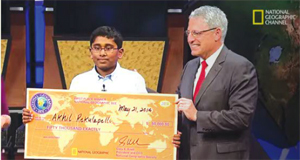 True to its motto, “Bee the Best you can Bee,” NSF children have created success stories. They have achieved a seven-year winning streak at the Scripps National Spelling Bee and a two-year winning streak at the National Geographic Bee. As the Foundation celebrates its 25th anniversary, children made 2014 a signature year by garnering championships in four major national competitions: Spelling Bee, MATH COUNTS, Geography Bee and Science Bowl. Sriram Hathwar became the co-champion at the Scripps National Spelling Bee by breaking the record of 52 years where Scripps Officials ran out of Championship words. Eighth grader Swapnil Garg emerged as the victor in the 2014 Raytheon MATH COUNTS National Competition in early May. Swapnil is the first NSF participant to claim the MATH COUNTS National championship. NSF participants Akhil Rekulapelli, an 8th grader, and Ameya Mujumdar, a 5th grader, captured 1st and 2nd places respectively, in the 2014 National Geographic Bee. NSF participants were part of the team that won the 2014 Middle School National Science Bowl Competition conducted annually by the U.S. Department of Energy. Snigdha Allaparthi and Abhijeet Sampangi of Massachusetts captained their team to 1st place, winning round after round and showing off a thorough scientific expertise in a variety of categories. What a gift to an organization in its Silver Jubilee year! 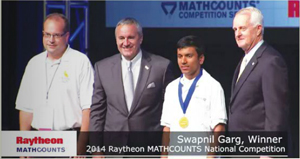 Established as a nonprofit organization in 1989, NSF provides a model for excellence in education that is second to none in the country. It is an all-volunteer organization run by and for Indian Origin Americans. It serves two main functions. The first is to offer spelling, vocabulary, math, science, geography, brain, and other bees to Indian American youngsters. It is no secret that Indian Americans have come to dominate the Scripps National Spelling Bee. The second function is to encourage academic excellence among the financially challenged by providing college scholarships in India. NSF wants to eliminate money as a barrier for higher education, especially for those who excel in academics. Starting with one scholarship in 1989, NSF gave more than 2,500 scholarships during the 2013-14 academic year exceeding a cumulative total of 10,000 scholarships to date. It provides $250 per year per student, totaling $1,000 dollars to complete a four-year undergraduate degree – indeed a small amount compared to what it costs in the US, but it meets the annual tuition fee charged in most government colleges in India. It is heartening to know that using the pay forward concept, one of the students from the first batch in 1990 started his own trust in 2002 to provide hundreds of scholarships to financially challenged students. 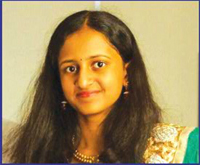 NSF provides a unique opportunity for children to excel and shine in education starting with first grade. It believes that every child is a winner, and even ordinary children can do extraordinary things; it’s like transforming coal to a shining diamond. NSF stresses well-balanced priority, believing that a well-rounded education encompassing arts, sports, math and science is critical for children. These contests help children improve their communication skills, inspire self-confidence, and empower them to become better citizens. To round out this statement, Chitturi says, “We introduced Universal Values as a 30-week program with one hour per week online workshop to practice values in our daily lives, not only for children, but also for parents and volunteers. This is highly relevant in a globalized world of today with enormous diversity that we have on this planet, as technology brings the entire world to our door front in a matter of seconds continuously, day and night.” 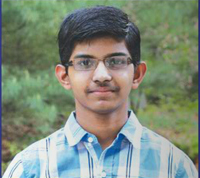 Immigrants from India tend to be highly educated, ambitious and hardworking. In turn, they place a very high priority in educating their children. With parent support and drive, children tend to focus more on academics. Indian Americans are more aware of the need to be able to effectively compete with other countries in a highly globalized world. All of these factors positively motivate children to strive for academic excellence. NSF and other Indian-centered competitions offer youth the training and experience necessary to hone their skills and practice on their way towards the broader national championships of Scripps, National Geography, MATHCOUNTS and Science Bowl. As pundits debate why Indian Americans win so many of these competitions, one answer lies in the organizations the community has created to spur these interests. Earlier champions become role models in motivating and inspiring children in the succeeding years. 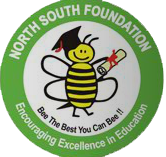 Labor of Love
Given that NSF is an all-volunteer-run organization, expenses remain low. One US volunteer said, “I had the opportunity to volunteer at a NSF competition. I saw a multitude of dedicated adults stapling and organizing papers, directing families to proper rooms, reading out instructions and words, grading work and tallying scores, and more. And that does not include all the work that took place before the day’s event. Many of these adults did not even have children participating in the competition; they assisted because they care about the organization and its goals. This in turn means that more scholarship money is able to go directly to the recipients in India.”

NSF has now increased its impact back on India. Since 2011, three contest centers opened in Hyderabad, each of which offers spelling, vocabulary, math, and science bee competitions to 1,500 participants. This is a direct instance of Indian Americans serving as a bridge between American learning platforms and India. Chitturi says, “So far the experience has been quite positive, and we hope to expand to more centers as we get more volunteers.” Drop by drop makes an ocean.

Congratulations to the Graduating Class of 2014
So You Don’t Want to Be a Doctor? Other Options in the Medical Field