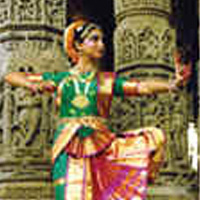 These syllables are very strongly etched in my mind as my sister practiced her Bharat Natyam steps assiduously. They would surely have distracted my watching TV, but at that time there were only two channels, and none with cartoons! My son will reminisce about different set of sounds, since my daughter is learning Kathak. We will meet Kathak in a future issue.Bharat Natyam, along with Kathak, Kathakali, Odissi, Kuchipudi, Manipuri, and Mohiniyattam, form the main classical dances of India. Bharat Natyam traces it roots to the Natya Shastra, though its maturity in the current form is considered recent. It has evolved from a traditional solo dance, often religious in nature, to dance performances which are theme-based.

In recent decades, we have often seen elements of Bharat Natyam incorporated in dance sequences of Bollywood movies. This has extended the reception of this dance form to a much wider audience. There are many actors, like Vyjayanthimala, Hema Malini, and Meenakshi Seshadri who started their careers as Bharat Natyam artists, and then moved on to movies. Abroad, the inclusion of Bharat Natyam as part of Festival of India programs have raised awareness of this dance form among non-Indians, who often consider it representative of one of the main Indian classical dance forms.

The first striking aspect of a Bharat Natyam performance is visual. As the dancer gracefully takes center stage and begins with an invocation to God (Vandana), we cannot help but admire the multicolored, shining silk sari, knotted hair with flowers (often jasmine), the heavy unmistakable golden broad necklace, bracelets, head jewels, and painted feet. Many of the Bharat Natyam poses accentuates the pleats of the sari which open and close like a Chinese fan. The picture of this fan itself is often enough to identify a picture as that of a Bharat Natyam dancer.

Bharat Natyam movements are very angular and symmetrical. Movements in space are traced along straight lines, or imaginary
triangles. This gives Bharat Natyam its distinctive characteristic. The anklets emphasize the rhythm of the music as the feet establish firm and flat contact with the floor. These are coordinated with graceful  hasta mudras (hand gestures) and expressively facial expressions.

Bharat Natyam has its roots in South India, and hence it is still mostly performed to Karnatic classical music. In addition to the singers and mridangam (two-sided  drum), we also see the flute and violin as part of the ensemble. The lyrics of the music are often in Sanskrit, Tamil, or Kannada, though that is now slowly changing.

Since the traditional dance is an enactment of a religious story, many of the stances, mudras, and sequences have very specific representations. The hand gestures cover a very wide range of concepts, both concrete (like kings, mountains, rivers) and abstract (like beauty and truth).

A conventional Bharat Natyam performance consists of numbers called vandana, alarippu, jatriswaram, ahabdam, varnam, padam, tillana, and shloka. These can be viewed as different movements of a symphony or acts of a play. Creative artists like Mrinalini Sarabhai, Chandralekha, and others have pushed the traditional boundaries to touch contemporary issues in form of dance dramas. In South Florida itself, we have been enthralled by events like Jazz Yatra, which feature Bharat Natyam and Kathak artists along with Indian and Western music.

One of the Jazz Yatra artists, Neha Shah, is based in South Florida, and teaches Bharat Natyam at South Florida Hindu Temple (SFHT). She received her early training from Late Kum. Pratibha Pandit, and later she received advanced training from Late Guru Kubernath Tanjorkar. She has performed in more than 20 countries at various festivals in front of dignitaries including Mrs. Indira Gandhi, Queen Elizabeth, and the President of Kenya.

AT: We nowadays see a lot of fusion between Western and classical dance styles. How do you choreograph such programs while still remaining true to the Bharat Natyam tradition?

Fusion can be created by artists practicing different dance styles, either by finding some similarities in dance movements or by creating “jugalbandhi” where they present their movements alternately. Thus we explore new horizons while remaining
true to our dance style. I have successfully choreographed Bharat Natyam with Rajasthani folk dance, flamenco, ballet, tap and other western styles, which were very well received.

AT: We do not get to see too many male dancers in Bharat Natyam, especially so in the US. Do you think there is a special reason for this?

NEHA: This seems to be more the case for people belonging to North, West, and East parts of India residing in US. I have seen several male dancers trained in the US who hail from families from South India. In my view, one reason could be lack
of exposure to great male dancers from India. Classical dance is often viewed as feminine because it involves “Abhinaya.” This causes many young adults to shy away from experiencing this rich heritage. However, many great male dance Gurus like my own late Guru ShreeKubernath Tanjorkar of Baroda have nurtured our classical dance styles.

AT: How can someone who does  not understand the language of the lyrics and the symbolism of the gestures appreciate a full Bharat Natyam performance, apart from watching it as an abstract dance?

NEHA: “Abhinaya” is a unique aspect of Indian classical dance. Dancers convey meaning of lyrical passages/poetry/verse using appropriate hand gestures, eye expressions, body movements, facial expressions as well as other parts of body. An accomplished artist can effectively portray the mood of a dance piece which creates “Rasa” and the same mood in audience. The mood created by the singers and accompanists also plays a very important role in supporting this. A brief introduction before each item by the artist using hand gestures and facial expressions really helps the audience to enrich their experience. Dance compositions in other regional languages also help reach out to the audience, and we are beginning to see more of this.

AT: It normally takes seven years for students to graduate to perform their Arangetram. Is this same timeline followed in the US?

NEHA: Yes, I strongly believe in at least seven to eight years of training especially when they start learning at a tender age. During this time,  a girl also matures physically and mentally to understand and portray subtle aspects of dance technique and “Abhinaya.” However, the true essence of art cannot be captured in one performance or measured by number of years of training. Every  dancer takes his or her own time to blossom as an accomplished artist and becomes ready to perform Arangetram.

AT: What is the age range of your students? Is it ever too late or too early to start?

NEHA: I have students who started at five years of age to others who started even at the age of 40. Recently, I know of a dancer in Texas who performed her Arangetram at the age of 60! Dance is an expression of creative potential which should not be tied with age bar.

AT: What input would you give kids and their parents who want to select an Indian dance (Bharat Natyam, Kathak, Manipuri) to learn?

NEHA: The children are usually too young to decide. It depends more on the parent’s interest and access to teachers. However, children should be encouraged to attend dance recitals, workshops, and watch DVDs/TV shows of different
dance styles. The dance costume and music also plays an important role in the child’s mind to form a strong liking for a particular dance style.

AT: Who is your favorite Bharat Natyam dancer?

NEHA: It is very hard for me to pick one name because every artist offers their uniqueness to enrich this art form. I am a great admirer of exponents like Leela Samson, Yamini Krishnamurthi, Alarmel Valli, Padma Subramaniam, and Professor C. V. Chandrasekhar, to name a few.