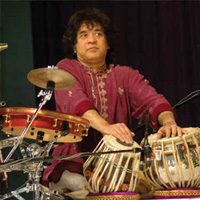 Born to celebrated tabla maestro Ustad Alla Rakha in Mumbai on March 9, 1951, Zakir Hussain Alla Rakha Qureishi is among the most gifted tabla players in the world today. Zakir went to St. Michael’s High School in Mahim, Mumbai, and then completed his graduation from St Xaviers, Mumbai. Although the child prodigy’s music career began at the tender age of seven under the tutelage of his illustrious father, Zakir started touring by the age of twelve.

Talking about his father and guru Alla Rakha, Zakir says that when he was a baby, his father used to hold him in his arms and sing rhythms in his ear.

“He would sing these rhythms to me and by the time I was three or four, in my subconscious mind, these patterns and the sounds of this language were swirling about. didn’t have to learn the vocabulary of the language or the grammar of the tabla to be able to execute patterns on it. The knowledge was already there. As a child grows up listening to his or her parents’ talk, that language is already there in the mind when the time comes to finally speak. The same was true of the tabla for me.”

Four decades later, Zakir’s unique technique and mastery over the musical instrument have undoubtedly put him on the highest pedestal in the realm of world music and is hailed as a prodigious percussionist both in India as well as abroad. To Zakir’s credit, this trendsetter has facilitated the bonding between classical Hindustani and Carnatic music traditions and also pioneered the blending of Eastern and Western music throughout his brilliant performances with North and South Indian musical aces as well as with western musicians.

At the age of 19, Zakir accompanied the legendary sitar player Pandit Ravi Shankar to the United States to perform at the Fillmore East and, three years later, he became the leader of the Tal Vadya Rhythm Band. The Tal Vadya Rhythm Band eventually transformed into the Diga Rhythm Band and in 1976, it joined forces with Mickey Hart of ‘Grateful Dead’ to compose a self-titled album titled ‘Rolling Thunder.’ In this album Zakir and his illustrious father Ustad Alla Rakha played a tabla duet for the first time.

In the meantime, in 1975, Zakir associated with the British guitarist John McLaughlin, Indian violinist L. Shankar, and ghatam drummer Vikku Vinayakram to form the ‘east-meets-west’ super group, Shakti. Embarking on his international career in 1970, today the globe-trotting Zakir has no fewer than 150 concert dates a year. Even to this day, Zakir continues to tour the world with the musicians from Shakti.

The maestro’s first solo album Making Music was released in 1987 and was immediately applauded as “one of the best East- West fusion music ever recorded.” Since then there has been no looking back for Zakir, who has worked with many Western and Indian artists along the way to produce numerous works for fusion, perhaps most particularly with The Beatles.

Recognizing his inimitable talent, in 1988, the Government of India honored Zakir by bestowing him with the Padma Shree, and he was the youngest percussionist to ever be given this civic award. Two years later, Zakir was honored with the Indo-American Award in recognition of his remarkable contributions in bringing the cultures of these two great democracies closer. And in 1991, he was one of the youngest musicians to receive the ‘Sangeet Natak Akademi Award’ from the President of India. This award was significant as it came from the India’s governing cultural institute!

In addition to these honors, Zakir has won numerous laurels abroad. The year 1992 was a watershed year for the maestro when Planet Drum, an album created and produced by Zakir and Mickey Hart, was awarded the Grammy for “Best World Music Album.” Planet Drum also won Zakir and Mickey the Downbeat Critics Poll for “Best World Beat Album” and the NARM Indie Best Seller Award for “World Music Recording.”

Name and fame spread like a wildfire and in 2006, Princeton University invited Zakir as a visiting professor for a semester and in the following year, the maestro was invited by Stanford University as its visiting professor for a quarter. He is also the recipient of the 1999 National Heritage Fellowship, the United States most prestigious honor for a master in the traditional arts.

During his long and stupendous career, Zakir has acted in and composed the music for Heat and Dust from the house of Merchant Ivory production. In addition, he has scored the music for a number of movies like Custody and The Mystic Masseur by Ismail Merchant, and has played tabla on the soundtracks of Francis Coppola’s Apocalypse Now as well as Bernardo Bertolucci’s Little Buddha. Besides featuring in documentary films like The Speaking Hand: Zakir Hussain and the Art of the Indian Drum and Zakir and His Friends, Zakir has also composed, performed, and acted as an Indian music advisor for Vaanaprastham, which was screened at the Cannes Film Festival in 1999.

In his personal life, Zakir is wedded to renowned Kathak dancer and student of Sitara Devi, Antonia Minnecola, an Italian American who serves as Hussain’s manager. His two daughters, Anisa Qureshi and Isabella Qureshi, are also studying in the field of arts.