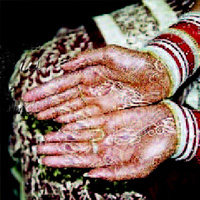 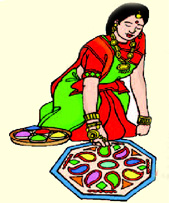 I still remember the first time I was introduced to a compass – shiny white metallic. They were not available in the different colors we see them now. First, I used it to make circles, but then realized that it could also be used to form intricate designs – rudimentary forms of geometric rangoli. Later on in art class, as many who studied in India would remember, we had freehand drawing. Half of a drawing, typically the kind of design we would see in a rangoli or mehndi would be given, and we had to draw the mirror image. The shapes were often traditional mango-like or versions of peacocks and elephants. These were exercises in symmetry as well as appreciation of the wonders that would be made once the drawing of curves was mastered. This also taught the fundamentals of rangoli.

Rangoli is the art of drawing designs, patterns, and motifs on a plane surface – typically at the entrance, in a courtyard, or the floor a house. They are also seen on walls, though this is less common given the traditional materials that are used to create them. Rangolis are common through India, though in some places they are known by different names such as alpana (in Bengal) or kolam (in South India).

Rangolis are made from natural raw materials like colored rice, colorful flour, pulses, turmeric pastes, and sometimes even leaves and sand of different colors. The final beauty of the rangoli is enhanced by the use of these natural elements. Recently in the US, rangolis are also being drawn and painted using roadside chalk of many colors. Purists may vehemently disagree in calling the final result a rangoli. This is just one of the ways things are changing, and traditions morphing.

Popular designs include natural elements like the sun, moon, lotus and other flowers, fish, peacocks, elephants, and conch shells. A seemingly simple lotus takes on eight leaves, 24 leaves or even triangular leaves through the creative hands of the designer. Geometric circular and angular patterns are also very popular, as are diyas with flames and the Om symbol. The whole design can be embedded in a square or a circle. Circular patterns reflect the endlessness of time, with no definite beginning or ending. This philosophical concept is deeply entrenched in Hinduism. We also see borderless patterns, where patterns unwind to form a central theme, petals from a flower, or branches from a tree.

The real season of rangolis, where we see them magically appear on the doorsteps of so many Hindus, is during Diwali. This is the time when everybody is wearing their best or new clothes (always fun as a kid!), and visiting relatives, many of whom will not be seen for another year. Apart from Diwali delicacies, each house normally invites us in with its own distinct rangoli. These decorations and lighted houses are also invitations for Lakshmi, the goddess of wealth, to grace the house. It is symbolic of prosperity entering the home.

Rangolis are not exclusive to Diwali, but are created on major festivals and auspicious occasions like weddings. The art of making rangolis and filling them with colors are generally learned and passed on as a family tradition, especially among women.

In this issue, we talk to one such artist who has picked up the art of rangoli and mehndi from her family at a young age. Kittu Bhatia is a professional mehndi artist, who also has her own fashion boutique in South Florida.

Amit: How and when did you learn the art of mehndi and rangoli?
Kittu: I learned mehndi by myself when I was around 12 or 13. In events like weddings and Karva Chaud, everybody wants mehndi on their hands. I started putting them on my Mom’s and Aunt’s hands, and then slowly others also wanted me to put it on their hands.Initially there were no complicated designs but just flowers and such things, but over time I started doing complex designs. 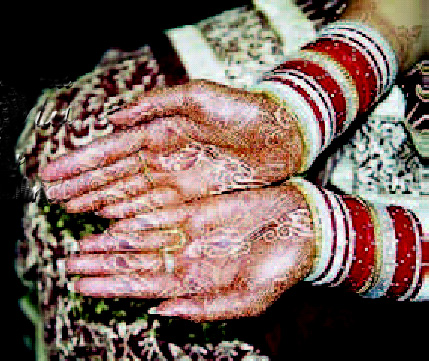 Amit: What kind of designs do you like?
Kittu: My preference is for designs of traditional Indian designs.

Amit: What do you think makes a design Indian?
Kittu: I like designs that are Rajasthani in origin, with paisleys as one of the main motifs. These are droplets or mango-shaped patterns. Indian designs cover the full hand.

Amit: What kind of rangoli do you do?
Kittu: The latest one that I did was a 5 x 5 feet rangoli. Since I use water colors, I did it in a covered patio to protect it from the rain. If it rains, it goes away, and then you have to do it again if you want it back. Creating that piece took a long time – hours.

Amit: What kind of colors did you use?
Kittu: I used three colors – yellow, red, green. These colors show very nicely since I did them on white tiles. The contrast adds to the beauty. This allows me to be creative and makes me happy.

Amit: How popular do you feel are the arts of mehndi and rangoli?
Kittu: Rangoli is a very personal thing. But Mehndi is growing in popularity among American and Spanish populations. I see a lot of them wanting Indian tattoos. Moreover, when they see Indians with henna, they inquire and want it too.The popularity in the Trinidadian community, where I do a lot of mehndi, is very high. Although they have been out of India for more than we have, almost 200 years, their roots seem to be stronger. In some ways, they are more traditional than Indians who come from India.

Amit: How do the stick-on tattoos compare with real mehndi?
Kittu: Both of them are temporary, and not everybody can put on mehndi, either because of convenience (mehndi needs to be kept on the hand), expense, or availability of mehndi artists. However, mehndi comes with a whole culture of its own, especially when put in a group. There are also lots of songs that go with it.

Amit: What is the requirement for kids wanting to learn mehndi and rangoli? What is your advice to them?
Kittu: Mehndi and rangoli are folk arts and the best way to learn them is by doing. You need to have an artist’s hand to do all these things. For example, if you are making flowers, it has to be even. If you make 10 petals in a flower, you cannot make one very big and one very small – the flower should look like a flower.

The Change We Need
John McCain