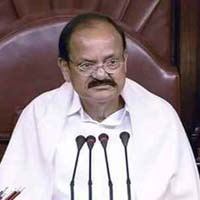 While addressing the delegates, the Vice President called on to the homoeopathy professionals and scientists to undertake more research in this field of medical science, which is widely used as a system of healing in the world and is one of the most popular treatment methods in India. He also urged the scientists working in this profession to undertake innovative and exploratory research in Homoeopathy and hailed the scientists of CCRH who are working in collaboration with IIT Bombay scientists on a new way of potentisation of homoeopathic drugs that ensures quality and right source of original substances of drugs. He urged the researchers to take this work further to bring more credibility to homoeopathy, thereby taking it to a new high. The Vice President also emphasise on healthy nation. He said that healthy nation is more important than wealthy nation.

The AYUSH Minister Shri Naik, while extending his wishes to the delegates on the occasion of World Homoeopathy Day, recalled the great man that Hahnemann was and how his scientific aptitude helped him to discover a healing system based on infallible laws of nature. He further congratulated the council for its 40 years of research commitments in the field of Homoeopathy by working on infectious and other nationally significant diseases like acute encephalitis syndrome, mother and child health problems, dengue, chikungunya etc. He assured the full support of his Ministry in supporting the council in undertaking high quality research and helping to develop big data on homoeopathy which is required to validate this ancient wisdom. He commended Council for linking research with education by signing MoUs with academic institutes with the aim to orient postgraduate students and faculty to research. He said that homoeopathic colleges should ensure their infrastructure supports research in homoeopathy.

The Secretary AYUSH Shri Vaidya Rajesh Kotecha emphasised the Ministry’s efforts to bridge the gap between science and tradition through researches in the field of AYUSH.

The Vice President also conferred the awards bestowed by CCRH to incentivise the contributors in the field of Homoeopathy research. The Life time Achievement award was conferred to Prof. Jayesh R. Bellare, Institute Chair Professor at IIT Bombay who has done pathbreaking research on the action of homoeopathic remedies in the realm of Nanotechnology. The Best Teacher award was presented to Prof.(Dr.) Niranjan Mohanty who is the former Principal of Abhin Chandra Homoeopathic Medical College, Odisha with over 4o years of active teaching service. The Young Scientist awardees were Dr. Varanasi Roja, Scientist-2, CCRH who has contributed significantly to clinical research in Homoeopathy and Dr. P.S Chikramane of IIT, Mumbai who has extensively studied the biological effects of nanoparticles. Best Research Paper Awards were conferred to Dr. Papiya Nandy, Emeritus Professor Jadhavpur University, Dr.Satadal Das, Professor and Head Department of Pathology and microbiology, D.N De Medical College & Hospitals (West Bengal) and to Dr. Rajesh Shah, acclaimed physician and researcher.

On the occasion of CCRH completing 40 years a ‘Webinar series’ was released in association with Mind Technologies Pvt. Ltd. These webinars will provide excellent opportunity of learning to practitioners, faculty, undergraduate and postgraduate students/interns, PhD Scholars and researchers. A Mobile App for the convention, ‘WHD CCRH App’ was launched as a first of its kind initiative to make this convention a global event.