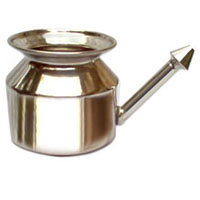 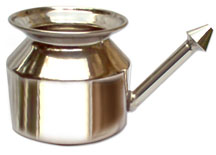 WARNING: The following article discusses in great length and vivid detail the expulsion of bodily fluids, namely nasal secretions. If you are squeamish, keep reading you’ll get over it.

Sniffling, sneezing, coughing, aching, stuffy head, fever…I felt like the woman in the Nyquil commercial. Although I am not prone to allergies, with two kids in preschool, I inevitably catch a virus at least once every two months. This time, my cold had progressed to a full-blown (no pun intended) sinus infection. My teeth hurt from the intense sinus pressure. My throat was parched from having to mouth breathe. I had already used a nasal spray decongestant for the maximum of three days, and it had, in fact, made my congestion worse. I was miserable and desperate for relief. And then…I heard the voice of an angel. Angela, that is, my aerobics instructor. I remembered her expounding the virtues of her neti pot during my cardio kickboxing class. Two days and a fifteen dollar neti pot later, I felt like a new woman. I did eventually need antibiotics, but the course of my illness and duration of my symptoms were significantly shortened by the use of adjunctive nasal irrigation.

I can’t say that I learned about the neti pot in medical school. But in more recent years, the ancient Ayurvedic practice of jala neti has become more widespread. In fact, it was featured on Oprah by Dr. Mehmet Oz! Though just now gaining popularity in the West, jala neti is a common practice all over India and in other areas of Southeast Asia, often performed first thing in the morning as part of one’s daily routine. Seasoned practitioners can cleanse both nasal passages and sinuses in less time than it takes to brush their teeth.

Ayurvedic Roots
Jala neti literally means “nasal cleansing with water” in Sanskrit. It is referred to in the original yogic texts known as the Hatha Yoga Pradipika and the Gheranda Samhita. Jala neti is one of six purification techniques undertaken prior to the practice of yoga to help prepare the body for the yoga practice. Yogic breathing practices known as praanaayam are enhanced by the practice of jala neti since many of them involve deep breathing through the nostrils. The ancient yogis developed a wide range of methods for body and mind cleansing. These amazing ways of external and internal cleansing were not just for health, but in preparation for higher states of meditation so as to be able to attain enlightenment, and eventually, moksha (liberation). However, the average practitioner today performs jala neti more for improved quality of life rather than as a step towards transcendence.

Modern Medical Evidence
Jala neti has been proven to treat and prevent symptoms related to viral colds, acute or chronic sinusitis, and allergies. It has been accepted and recommended by otolaryngologists (ENTs) and the medical community at large. In fact, the American Academy of Otolaryngology-Head and Neck Surgery (AAO-HNS) has published guidelines for the treatment of adult sinusitis in which they endorse the use of nasal irrigation.
The first line of nasal defense is the tiny hairs called “cilia” which trap larger particles entering the nose. Sometimes, due to a gradual build up of dust, pollen, and other allergens, they can become clogged which inhibits their proper functioning. Regular nasal irrigation can prevent this build up. The second line of defense is a layer of mucus that functions as a trap for smaller foreign particles and bacteria. During infections and flare-ups of allergies, this mucus becomes very thick and cannot drain properly. Bene?ts of nasal irrigation are improved ciliary function, clearing out of thick, persistent mucus, decreased nasal congestion, relief of nasal dryness, improved breathing, reduced coughing and other symptoms of post-nasal drip, and mechanical rinsing of infectious virus and bacteria, allergens, and irritants. Overall, this leads to improved sinus health. Other benefits may include clearer vision, as jala neti will allow better drainage of the tear ducts into the nose, enabling better cleaning and moistening of the eyes. It may also improve the senses of smell and taste. Lastly, it may lead to deeper, more relaxed breathing which, without a doubt, has a lasting positive impact on one’s general wellbeing.

How To Neti (Is that a verb?)
I know what you’re thinking. “Yuk, no way! I might drown or choke. I don’t think I could do it. Gross, that’s socially unacceptable. It’s weird and scary. A good party trick but your’re not really serious. Disgusting.” These were actual comments made prior to their first experience with nasal irrigation on a questionnaire given to participants by S. Saraswati in a 12-month study on the effects of jala neti. After their first and subsequent experiences, participants had comments like, “Clean and fresh feeling. Not as bad as I thought. Much clearer breathing. Smelled things I’d never noticed. Incredible relief from congestion. Great, really alive.”

So, how is jala neti perfomed? There are actually three stages of the authentic form of jala neti, however the second and third stages should really be learned under the guidance of a trained practitioner/yogi. The first stage, however, is quite simple and easy to learn by just watching a demonstration. You can easily find jala neti tutorials online by tuning into YouTube. (Just don’t imitate the guy performing neti with coffee and whiskey!) The typical method uses an isotonic (same concentration as natural tears) solution made from lukewarm water and non-iodized salt. But recent studies indicate that it is preferable to make a hypertonic saline solution. Here’s how you do it:

Troubleshooting: Some people may have extremely thick blockages that may need to be cleared gradually over several attempts. Burning or irritation of the nasal lining could be due to the water being the wrong temperature or concentration, or if iodized salt is used instead of non-iodized salt. If you feel sharp pains due to pressure on the sinuses stop immediately and consult a doctor. If you experience ear discomfort when performing jala neti, be sure to blow your nose more gently after the wash. If the problem persists, the openings of your Eustachian tubes may be particularly wide and you may not be a good candidate for nasal irrigation.

Impact of Jala Neti
Patients with chronic or recurrent sinus symptoms should consult a physician as they may have another condition such as fungal rhinosinusitis, cystic ?brosis, Wegener’s granulomatosus, ciliary dyskinesia, immune de?ciency, prior history of sinus surgery, or anatomic abnormalities (eg, deviated nasal septum). Nasal irrigation may possibly help control symptoms in some of these diseases, but more definitive treatment for the underlying problem may be required.

One out of every seven adults in America suffers from sinusitis that’s 31 million individuals annually. One out of every five adults in America is affected by allergic rhinitis that’s about 40 million people. The burden on the healthcare system is immense. The impact on a patient’s quality of life is even greater. With the simple and quick practice of jala neti on a daily basis, we can easily prevent and treat these conditions. We need to put into practice what the ancient yogis from India have known for thousands of years. So head on over to your nearest drugstore and buy yourself a neti pot…and, finally, take a breath of fresh air.