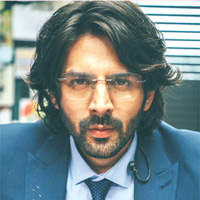 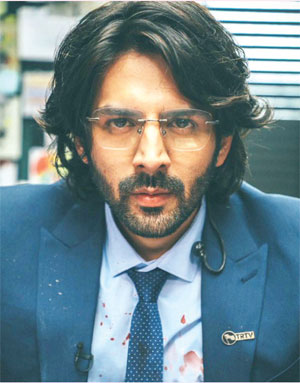 The actor shared the first look of his character on social media introducing his fans to his character Arjun Pathak with relevant hashtags. Aryan has long hair in the movie … unlike any of his previous films. He also sports heavy stubble and a moustache making him look different from any of his earlier characters. Though the actor is seen donning a formal western suit, his  light blue shirt has droplets of blood on it. The actor looks quite intriguing and fans will have a great time raving about his “different look.” Dhamaka is a realistic film that tells the story of the inner mechanisms of TV houses during the coverage of some high profile live events. On his birthday in November, Karthik announced his comments about the movie sharing a poster. The actor also shared a side profile picture of his character staring at a burning bridge on the horizon.

Kartik calls the script of Dhamaka a miracle script and confesses that he was practically sitting on the edge of his seat all through the narration. He confessed that this was an opportunity for him to express his versatility as an actor. He was also excited to collaborate with Ram, RSVP and Ronnie.

The actor has been previously known for his comic roles in movies like Sonu Ke Titu Ki Sweety and Pati Patni Aur Woh. He also essayed romantic roles like Akash Vaani’s Akash but Dhamaka will see Karthik foraying into a completely different genre.