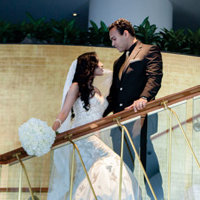 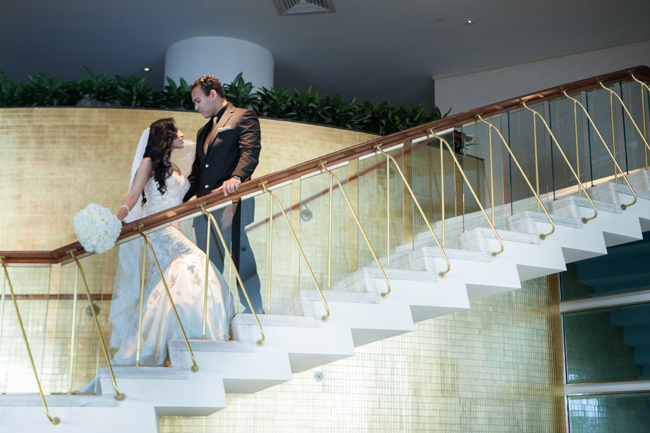 Lisa Mattam and Antonio Nunez were studying medicine at the same medical school when they first metin a coffee shop. Aaron mustered up the confidence to approach Lisa, she smiled, and he felt his heart flip.

After dating for almost a year, Antonio officially proposed to Lisa on October 17, 2012, just one day before her birthday. He popped the question after a romantic dinner at YOLO Restaurant on Las Olas Boulevard in Ft. Lauderdale. Antonio took Lisa on a fairy-tale gondola boat ride through the city of downtown Fort Lauderdale in Florida. Their favorite songs played in the background as they enjoyed dancing together and finally he produced a ring, while reading a poem he had written especially for her; with tears in her eyes, she said yes.

Lisa and Antonio started planning their wedding on January 2013, which was the same month as their engagement party. For their ceremony, Lisa and Antonio selected St. Bona venture Catholic Church. Father Zacharias, an Indian priest, performed the ceremony while an Indian choir filled the church with lovely melodies. The podium was decorated in beautiful white roses, which symbolizes innocence and purity. The bride carried a white and ivory bouquet.

The flower girls, dressed in traditional mustard shaded saris, featuring a dash of color that included maroon, orange and mustard flowers. Antonio composed a charming poem for their wedding programs that featured photographs of the bride and groom on the front and back cover.

For the ceremony music, the couple chose to use the choir from Our Lady of Health Syro Malabar Catholic Church. The bride made her grand entrance to Canon in D by Johann Pachelbel and exited to Songs such as Air on the G String by J. S. Bach.

Lisa and Antonio did not want to compromise on any part of their wedding. For transportation, they hired an opulent limo service. The reception was held at the legendary Fontainebleau Miami Beach. The couple chose the lavish hotel not only for its history, but also the luxury it offers and the breath-taking views it has. The bride and groom also loved the great ambiance and large space options.

Ivette Rosales, Senior Catering Sales Manager of the Fontainebleau assisted the couple with all the details of their event. From the outdoor beach front reception to the elegant dinner reception, the reception was a beautiful affair. The centerpieces created by Al Davis of BE Original were particularly stunning. Mr. Davis decorated the venue using 8-foot chandeliers with hanging crystals. In the center of every chandelier was an arrangement of white and ivory roses. The highlight of the décor was a three tiered flower vase setting. Pictures taken for their engagement ceremony were used to decorate their seating table cards.

The couple’s music selections for their reception started with Violinist Dave Damage who entertained guests for the cocktail reception which took place on a Glimmer terrace overlooking the sunset on the beach. The couple also selected Bollywood dancers who did a great job of entertaining the crowd during dinner. The evening entertainment highlight was DJ Raj who was flown in from New York. He performed with a live crew that kept an already enthusiastic crowd engaged all night.

The couple danced to a Viennese Waltz of Lea Michelle’s version of “Without You.” The violinist played the intro for the song before the dance began. The couple’s dance was a surprise and a highlight of the reception. The couple also