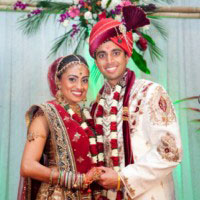 They met and fell in love at first sight… marriage followed a decade later.

Tejal was at dinner at a family friend’s place in London when cupid struck. For her, angels sang, birds chirped, and the sun brightly shone off Nirav, the guy with a big smile, dining with her. Both were in London attending a wedding, and the spark between the two turned into a relationship of a lifetime. Destiny kept them apart by thousands of miles, but the bond remained and only grew stronger with every mile.

Nearly a decade after the two met in London, Tejal was driving home to Sarasota from Ft. Lauderdale. After a day of being in class, she reached home only to find a driveway full of cars, but no lights on in the house. After ringing the doorbell a million times, her cousin answered the door. Waiting for her, behind the door, was a surprise that Tejal had been dreaming of ever since that fateful London dinner. The house was strewn with rose petals and candles. Nirav was on his knees by the pool seeking her hand for life. 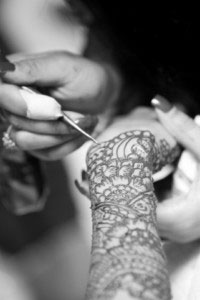 A “yes” escaped from Tejal’s mouth and members of the two families were on the path to planning a perfect wedding. They had a year, but with so many things to be taken care of, the time seemed too short.

The couple picked Sarasota as the venue for the big day as the bride wanted to walk down the aisle in her childhood hometown. She grew up in the beautiful town, and thought the venue would be a wonderful getaway for Nirav who was based in Chicago.

Pre-Wedding Events
The mehndi was organized at the bride’s home in Sarasota. Decorations and music for the evening were all Tejal’s personal choice. Nirav’s family too joined in for the celebration. It was an icebreaking event for both the sides, much needed to set the tone for the festivities in store.

For Garba night, Hemang Thakkar’s live band flew in and conquered. Palloo’s decorations for the evening were simply fabulous. Garba enthusiastic guests were all so high with energy that the night simply refused to take a break. They would have danced until the sun came up had there not been the wedding early the next day. 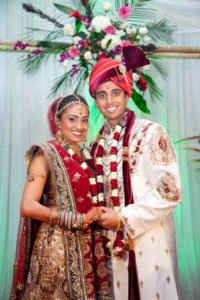 Wedding
The theme for the wedding décor was centered on bamboo and peacock. Adding much romance to the ambience were the loads of vibrant flowers and exquisite floral arrangements.
The most important part of any Indian wedding is when the groom puts vermillion on the bride’s forehead. Making the moment all the more memorable was the beautiful blend of music spinning and even some singing by the DJ himself. A rare sight, indeed!

Reception
The décor theme from the wedding ceremony was carried forward in the reception. The timely turn of events and attention to the tiniest of details depicted exceptional planning. Every event and ritual was staged with precision. 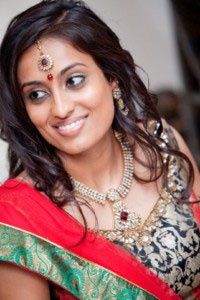 The emcees, performances, skits, and speeches made the night all the more memorable. Everyone involved in the celebration, including the guests and the hosts, had smiles which went on widening throughout the night.

The jodi of Tejal and Nirav is that of two very organized individuals and they had every detail of the wedding extensively planned out. From having the guests fly to Sarasota early in case of a snowstorm, to having backup vendors in case one cancelled, they had all alternatives lined up.

Incidentally, the couple did miss one tiny detail – a marathon! A few days before the wedding, Tejal and Nirav received a call from the Hyatt saying that they would have to reschedule the wedding as a marathon was being held near the hotel. There is not doubt that 3,500 people running by the hotel would keep the entrance and exit to the venue blocked just around the time of the wedding. By then, the couple had ten years of a strong relationship behind them, so it was nothing for them diligently plan their way around the marathon to walk down the aisle right on time!