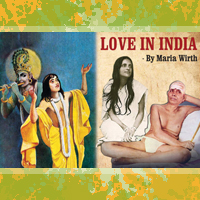 Love In India By Maria Wirth 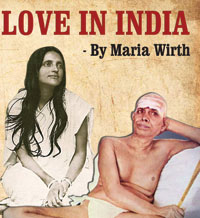 There is no other country where basic questions crop up as quickly as in India,” a young Spanish woman recently told me. I fully agreed with her, as it reminded me of my early time in India some 30 years ago. One basic question then was about love. In the west, love refers mainly to the attraction between the sexes. Falling in love is considered highly attractive especially among youngsters and causes envy in those who are not in love. And whether one is in love seems to depend on whether one met Mister or Miss Right. However, experience shows that even though one thought one has found the right person, the emotional high usually wears off and what one had considered as eternal love sometimes turns not only into disappointment, but even into hate. The conclusion usually is that it was the wrong person, and one is again on the lookout for the right one. There is probably no other issue in the west that causes so much emotional pain among people as so called ‘romantic love.’ I wondered whether the western approach is immature and whether India has a more mature approach to love.

“True love is not possible between individuals,” claimed the saintly Anandamayi Ma. And, “Genuine, true and permanently fulfilling is only the love for God.” God here means Brahman, the One that is our Self. I had been confronted with this view right from the beginning of my stay in India. Our ‘human loves’ don’t quite merit being called love. The sages suggest words like attraction, dearness, fondness, infatuation, friendship, even delusion for our love-feelings, because there are always egoistic intentions involved. True love however has no hidden agenda and one’s ego does not come into the picture.

An analogy is used for illustration: The wave (individual) is one with the ocean (the Whole, God). If the wave fixes its gaze only at other waves, chooses some to give its love to and to receive their love, then this love is narrow, small minded and definitely not as eternal as the wave may dream it is. Eternal is only its oneness with the ocean. The ocean is the essence of all the waves, and the wave is anyway for ever one with it. The ocean is its great love, even if the wave doesn’t know it. As long as the wave considers itself to be simply a wave, unconnected with the ocean, and doesn’t even see the ocean because of all those other waves, it suffers from the illusion, that it is lacking in love and that it has to look for it among the other waves.

“Don’t get caught up in the illusion,” advised Ramana Maharshi, the sage from Tiruvann-amalai. “The senses are deceiving you. There is only the One behind all names and forms, whether they are beautiful or ugly. Think of the projection of a film. The different persons are fascinating, but they don’t have any substance in themselves. Substance has only the screen, on which they appear. This screen stands for the one consciousness.” 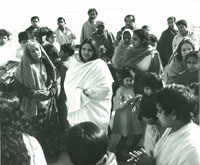 I knew not only intellectually that there is a whole behind the multiplicity – a fact that nowadays nobody can question thanks to the findings of modern science. Therefore I also knew that the Indian sages are right when they claim that only love for God can really and permanently fulfill, because He alone truly is.

However, it was one thing to understand this, and another to live accordingly. When I honestly looked into myself, I had to admit that my love for God was not very great. I certainly wouldn’t have called it ‘true love’. Moreover, I could not imagine how I could deeply love the One that is not accessibly to the senses. I felt there need to be at least eyes into which I could look. “Let me learn to love you”, I prayed. The second prayer which logically had to follow was more difficult: “Let me not fall in love again, but let me love all equally.” 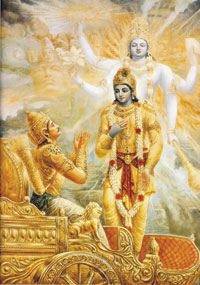 I tried to resign myself that I would have to manage now with a kind of ‘medium’ love for everyone for the rest of my life without any highlights. I didn’t quite believe that the whole screen could become my ‘great love’. The One was so incomprehensible, without any substance, like air. But if I wanted to live with integrity I had to put it in the first place.

By thinking such thoughts I had moved far from normal western thinking, however in regard to India, I was moving towards normal thinking, because here, the majority still considers it normal and important, to develop love for God. After all, life is meant to realise the truth and there are mainly two methods recommended: 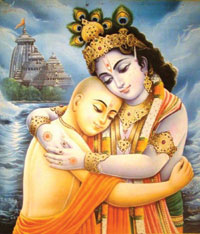 – Jnana – knowledge or wisdom. In jnana the main point is to be aware of the one limitless being, to identify with it and to deny the truth of the manifold appearances radically and continually. This path is more difficult, says Sri Krishna in the Bhagavad-Gita.

– Bhakti – devotion. The main point here is to develop love for God, and to dissolve in it. In both cases the goal is the disappearance of the ego. The bhakti path is easier, says Sri Krishna. And as the human being needs something tangible to love, he suggests to Arjuna: “love me”. Or love Rama, Shiva, the divine Mother and so on. One has the choice of many personalities with the noblest qualities – as a helpful means.

People hear it from childhood: bhakti fulfils. There are many stories of saints who were mad with love. Chaitanya Mahaprabhu, a professor of logic, who lived some 500 years ago, is an example. He finally left all logic aside and moved through the streets singing and dancing, always the name of Krishna on his lips. “A-chinta” he supposedly said when he left the university. He is the founder of the Hare Krishna movement. 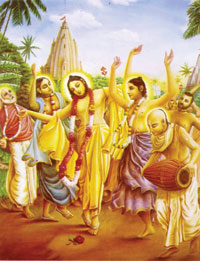 Of course, not all Indians strive for bhakti, because the attractions of the world are strong also in India. But in contrast to their western contemporaries, Indians usually don’t (wrongly) expect heaven on earth from romantic love. Here, love is not taken to be the opposite of hate, but as our basic nature. Therefore, they don’t give so much importance to falling in love, but rather to developing love in their relationships. Compared to them, our western attitude seems like kindergarten – where sexual attraction is considered as the highest of all possible human states, where ‘making’ love scores over ‘feeling’ love, where ‘love for the neighbour’ is delegated to charity organisations and where love for God has no place. I did not doubt that westerners, too, sincerely want to love. But I felt that we are lacking in wisdom and therefore experience so much disappointment. In India, people have not yet completely thrown out their ancient tradition and the wisdom contained in it, even though many are eagerly doing it. Yet many Indians are still well rooted in life. They still know where they have to look for happiness and love – in themselves …

India I learnt that the dream of eternal love is not unrealistic. In fact, love is so close, so real that it is quite amazing that it is not felt. It is not outside, but deep inside, intimately connected with one’s own being.

Maria Wirth is a German who went to India for a holiday after finishing her psychology studies at Hamburg University. She visited the Ardha Kumbha Mela in Haridwar in April 1980 where she met Sri Anandamayi Ma and Devaraha Baba, two renowned saints. With their blessing, she continued to live in India and dove into India’s spiritual tradition, sharing her insights with German readers through articles and books. For long, she was convinced that every Indian knows and treasures his great heritage. However, recently she noticed there seemed to be a concerted effort to prevent Indians (and the world) from knowing how valuable this ancient Indian heritage is, she started to point out the unique value of Indian tradition. Learn more about India and Hinduism through her blog: http://www.mariawirthblog.wordpress.com/