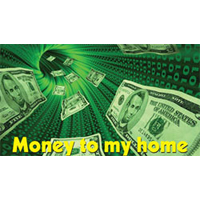 Money to my home

A recently released data by the World Bank officially records that remittance flowing back to developing countries from the bank accounts of their migrants was equal to a sum of $338 billion in the year 2008. What’s interesting here is that out of this huge sum, more than $50 billion was the contribution of Non Resident Indians only.

Ten on ten
India has consistently topped the chart for almost a decade now being the highest recipient of worker’s remittances. According to the World Bank figures, India received remittances worth $45 billion in the year 2008.

The World Bank acknowledged being surprised with the figures as South Asians proved to be stronger than all the expectations of the Bank. Report says that the remittance flows to Pakistan also increased by 24 per cent in the first eight months of 2009 on a year on year basis. Flows to Bangladesh and Nepal increased by 16 and 13 per cent respectively in the same period.

Creditable India!
Widening the smile further comes an estimate from Indian Prime Minister’s Economic Advisory Council (PMEAC). Under the chairmanship of eminent economist C Rangarajan who has also been the Governor of the Reserve Bank of India, PMEAC has suggested that the remittance flow to India will grow strongly in the financial year 2009 – 2010 (which runs from April to March). Inward private transfers accounted to have already reached $27.5 billion in the first half of the current financial year. PMEAC predicts that India will receive not less than $30 billion in second half of the financial year taking the total annual figure to over $57 billion, a nearly 30 per cent hike over the previous financial year’s total. 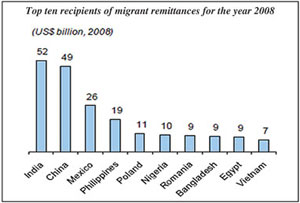 Credit for credit
In the era of recession the promotion in cadres and salary hikes could definitely not be credited for the funds credited by NRIs. It’s the liberalization of rules and regulations added to more flexible exchange rates. The convenient remittance services provided by Indian and International banks and several other organisations also encouraged shifting of channels from informal ones like hawala to official and proper banking channels.

Middle-East Vs West
A study on invisibles by the Reserve Bank of India (RBI) in the balance of payments comprising income from transaction in services and overseas investments, besides permanent transfers such as remittances by the Diaspora, has said that the Gulf has accounted for 27 per cent of the total remittances from NRIs globally.

The Central bank has quoted a survey on remittances by overseas Indians conducted in November 2009 that in comparison to a similar survey last done by RBI in 2006. The comparative data says that remittance from North America has dipped from 44 per cent to 38 per cent in three years as compared to rise in remittance from Gulf countries from 24 per cent to 27 per cent and from Europe – 13 per cent to 18 per cent.

Adding on to GDP
In developing nations like India where every dollar counts a lot, the remittances make up more than three per cent of the total national GDP. That’s a big contribution. For countries like Tajikistan, Tonga and Lebanon remittances contribute 25 to 50 per cent of their respective national GDP, similarly for Guyana, Nepal and Honduras the add-up is between 15 to 25 per cent of the GDP, remittance to such nations is nothing less than a lifeline to country’s economy.

Foreign direct Vs Indian direct
The NRI remittances are more than three times of what foreign companies directly invest in India (FDI). Hence the Indian government takes the flow seriously but not as gravely as FDIs. No issues with the hands sending the money but those on the receiving end. The government says that the NRIs’ remittances are primarily sent to family members to support them for survival. Once the family’s living standard improves, the forthcoming fund flow is invested in consumer goods, housing and land, and bank deposits for further security. As endorsed by a recent study from International Monetary Fund (IMF), very rarely are these remittances used to establish new industries and businesses.
For business investments which obviously accompany job creations and result in overall economic growth, the country needs to look forward to FDI and such concerns find no respite with NRIs remittance funds.

Side-effects
The IMF study also highlights that the money flowing back-home not always does good. The high remittances may actually come at the cost of decreased economic growth and lower productivity. Later to a mark, the money starts creating disparity in the society. Family of NRIs getting easy money indulge in lavish spending and extravagant lifestyle. Since the remittance, mostly as per the instructions of the sender, is supposed to be consumed or saved only and not to be invested, ultimately ends into a real estate investment.

Earn wise invest wiser
The aging population and ever-craving for better hands and brains will of course ensure ever increasing demand of migrant workers in developed countries and thus hefty remittances in return. What remains the issue of concern is its wise consumption and investment to reap maximum social benefits from these transfers, or else they could lead to some daunting disguise in blessings.