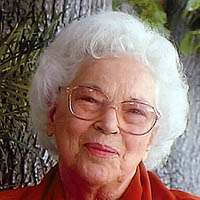 Be so drunk with the love of God that you will know nothing but God; and give that love to all.

Daya Mata, whose name in Sanskrit means Mother of Compassion, held this position of spiritual and administrative head of SRF for 55 years.

In 1931, when she was 17, she attended a lecture on yoga in Salt Lake City given by Paramahansa Yogananda. She stood out among the 4,000 attendees because of bandages on her face, which was swollen and scarred from a blood disorder.

She apparently had spiritual yearnings that were not fulfilled by the teachings of Joseph Smith and Brigham Young. She became fascinated with India after studying it in grammar school and resolved that she would visit it one day. Impelled by her experience, she moved to Los Angeles later that year and became one of the fellowship’s first nuns.

“I had a deep hunger for something more satisfying. I wanted something more than just going to church,” she recalled in a 1995 interview with the Salt Lake Tribune.

Over the next two decades she worked closely with Yogananda as his assistant. She compiled recordings of his lectures and helped turn them into mail-order lessons disseminated around the world. She also helped prepare the manuscript of his Autobiography of a Yogi, which has been translated into more than two-dozen languages since its original 1946 publication.

She was nearly 97 and lucid to the end, Lauren Landress, the group’s spokeswoman, said. Daya Mata had spent the past few years meditating and “communing with God.” Daya Mata means “Mother of Compassion” in Sanskrit, Landress said, and that was an apt description of the leader herself.

Though devotees worldwide hold Daya Mata in highest esteem, she spoke only of Yogananda and his teachings,

On behalf of the Board of Directors of SRF and YSS, SRF Vice President Mrinalini Mata said this in remembering Shri Daya Mata

From the very beginning when she came to the ashram as a shy young girl of seventeen, Guruji saw in her a disciple in whom he could place his utmost trust — a true devotee who yearned for God above all else, who would be the “nest egg” of his work, and mother to countless souls on the spiritual path. Through her heart’s receptivity, he guided the unfolding of her life, infusing in her the spiritual strength that enabled her to face every challenge the years would bring with utter faith in God, and with the sole desire to do her Guru’s will. Through the years, she laid a firm foundation for his work in both East and West and guided it from her complete attunement with his intent and spirit. She faithfully recorded his words of wisdom and steadfastly upheld the purity of his sacred teachings for all the generations of devotees to come.

About Self-Realization Fellowship
Self-Realization Fellowship (SRF) is a worldwide religious organization founded in 1920 by Paramahansa Yogananda who is known for acclaimed spiritual classic “Autobiography of a Yogi” in 1946. With Mrinalini Mata as the Vice President, it reportedly has about 600 temples, retreats, ashrams, and meditation centers worldwide and has presence in about 175 countries and lays stress on Kriya Yoga. Its sister organization, Yogoda Satsanga Society (YSS) of India, was founded in 1917 at Dakshineswar near Kolkata.

The ideals of SRF are to disseminate among the nations a knowledge of definite scientific techniques for attaining direct personal experience of God and to reveal the complete harmony and basic oneness of original Christianity as taught by Jesus Christ.

Paramahansa Yogananda came to the United States initially as India’s delegate to the International Congress of Religious Liberals in Boston. Throngs of Americans packed auditoriums and concert halls to hear the charismatic Indian discuss how meditation techniques could harness physical energy. Yogananda promised them that personal experience with God was possible, that human beings can evolve toward God through individual effort and that complete harmony exists between Christianity and yoga.

This optimistic philosophy was an immediate hit across the nation, but particularly in Southern California, where Yogananda established a center for Self-Realization Fellowship, complete with separate monasteries for nuns and monks.