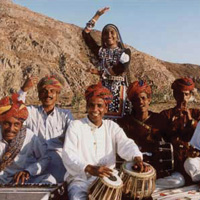 Musafir was conceived with a goal to introduce the full spectrum of Rajasthani styles and to show music within its context, including the rich visuals. It is composed of groups of musicians who in Rajasthan would not traditionally play together, but here they create an exciting fusion. Inspired by the intent to showcase Rajasthan in a “folkloric cabaret” its original compositions combine Rajasthani rural folk music with influences from Qawwali (Muslim devotional music), Indian film music, Arab popular music, and Hindustani (North Indian Classical) music. The vast endless locale of burning hot sand composes one of the most vibrant and evocative music cultures of the world.

In fact, the musical journey of Musafir includes a colorful mix of performers coming from all corners of the Thar Desert in the northwestern region of Rajasthan. Musicians come from the sedentary Langas and Manghanyar and nomadic Sapera.

Langas are basically Muslim musicians, who perform for Muslim cattle breeders at births, weddings, funerals, and religious holidays, receiving payment in animals and food. Their vocal repertoire includes women’s songs about the life cycle and the seasons (which men sing too), songs in praise of their patrons, devotional songs composed by nineteenth century Sufi poets, and film songs. Langas are known for their improvisations and their instrumental and vocal ornamentation. Langas generally play the sarangi, a vertically held bowed stringed instrument, and the satara and alogoza, which are double flutes with two pipes, one for drone and one for melody.

Manghaniyars are also sedentary Muslims whose home extends over the border into Pakistan, but their patrons are mostly Hindu Rajputs (a high caste) and Hindu Charans (a caste of poets, bards, and historians). The Manghaniyar repertoire is vast, including songs celebrating secular and sacred love as well as devotional songs about Lord Krishna. Typical Manghaniyar instruments include dholak , khartal and the kamaycha, the latter being fast replaced these days by harmonium. Langas and Manghaniyars also play surnai (double-reed pipe), murali (double clarinet with a wind chamber), manjira (small cymbals), and gunguru (bells, usually tied to the dancer’s feet).

The Saperas, on the other hand, are a sub-group of the migrant community of Kalbeliyas, who travel with mules and dogs. They have their own music but do perform professionally with Langas. They specialize in curing snake bites and in snake charming.

As has been mentioned, Musafir, which means ‘wanderer’ in Farsi, is a musical journey throughout the Thar Desert of Rajasthan, the original land of the Gypsies. The performers in this program do not put on the act as a team on in synchronization with each other, but they individually do their bit. However, the individual interpretation of lyrical and musical heritage of Rajasthan, the subtle hybrid versions of Indian folk and Hindusthani classical music has been superbly arranged in the act which also combines the acts of dance, acrobatics and feats of physical endurances of other participating artists.

While the governing art of Musafir is indeed its vivid musical poetics as there is never-ending opulence and diversity in Rajasthani music that is rich, heroic, melancholic and joyful, other forms of art govern all aspects of lives in Rajasthan and these have been equally and appropriately highlighted.

The central theme of Musafir revolves around the entertainment of travelers by local Rajasthani musicians. The travelers or the Musafirs are supposedly on a pilgrimage to Baba Ramdev’s temple, the great Saint of Gypsies. The Saint is worshipped by both Hindus and Muslims, yet their interpretations are very personal. The musicians, playing their own set of instruments and their own brand of music actually welcomes the travelers’. In the process, the dancing, fakirs perform fire-eating acts, men and women in colorful attire deliver scintillating dance recitals while an extravaganza of music is played on stage. Music that represents various traditions like the Qawwali, Hindustani classical, Sufi, and even Indian film music creates a fusion of sorts as well as a magical ambience before the audience.

Lead player and founder Hameed Khan is the captain of the ship who weaves the personal talents of the participants into a single note. He is accompanied by Khatu Sapera (performs snake acts and snake dance), Bal Chand (fire-eating dancing fakir), Sadik Khan and Sardar Khan (Vocal and sarangi player), Sawan Khan (vocal), Chugge Khan (Catanets), and Lom Nath (flute).

Musafir has performed for thousands of enthusiastic crowds at several concerts and festivals all over Europe, such as WOMAD, Roskilde, Paleo, Sfinks, and Ritmos. Musafir is featured on the CD “Gypsies of Rajasthan” (Blue Flame) and some members appeared in the film Latcho Drom, a staged documentary of Rom music.

Such international acclaim has not come to Musafir for just any reason. It is indeed the epitome of Indian music, magnificently put into a song, dance, and performance act that is tied by a common thread, the mysterious and mesmerizing Gypsy tradition. The entire act with master musicians, colorful costumes, beautiful dancers and fakirs neglecting fire and gravity takes the onlooker beyond the edge of reality. Travelers in Rajasthan and all over the world – Musafir sends messages of love, happiness and hope and brings the best of the desert beat. It is a performance worth seeing, and it is an act that remains in one’s mind for a lifetime.

Saptapadi: The Seven Vows of Marriage
Wedding Woes: What to wear?