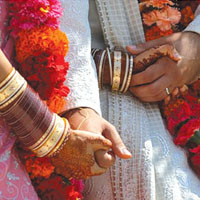 Saptapadi: The Seven Vows of Marriage 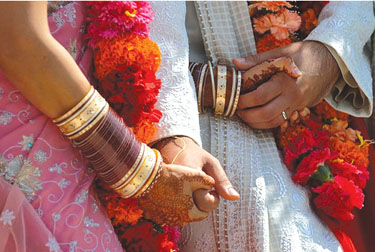 A Hindu marriage comprises of several meaningful rituals with varying degrees of significance. The rituals convey the values, which should be followed after marriage to lead to a happy married life. Marriages may be said to be made in Heaven, but they still need to be solemnized in this earth. A typical Hindu marriage is indeed an elaborate affair, with lots of rites and rituals, customs, traditions, and grand ceremonies that stretch for days prior and after the actual date of the marriage. However, in all the rituals and the customs that are followed and practiced, the central theme remains the establishment of the true relationship between a man and a woman, which culminates in conveying the actual essence of married life.

One such very important and integral component of a typical Hindu marriage is Saptapadi. It is an activity that is undertaken by the bride and the groom in front of fire, where the couple goes around the sacred fire seven times while reciting certain significant vows or invocations (one made by the bride and another made by the groom) with each circumambulation. Each of these movements is also known as phera and accordingly, Saptapadi is often referred to as Saat Phera in Hindi. Fire or Agni is considered highly sacred in the Hindu religion, and as such, vows taken in front of Agni are considered to be unbreakable. The God of fire, Agnideva, is considered to be a witness to the solemnisation of the marriage as well as a representative of the Supreme Being to provide His blessings to the newlyweds.

A Hindu marriage comprises of several meaningful rituals with varying degrees of significance. The rituals convey the values which should be followed after marriage to lead to a happy married life. The ritual of Saptapadi symbolizes the journey of life, which the couple should travel together hand in hand. They should be with each other through thick and thin. The husband accepts his wife as a token of good fortune and good omen to start their life together. The groom vows to take care, consult, and protect his bride at all times. While the groom takes the bride’s hand and moves around the fire together seven times, the priest chants mantras that include accepting the responsibilities of loyalty, love, mutual respect, understanding and procreation for as long as they live. The significance of seven times lies in the fact that according to Hindu belief, if two people walk seven steps together then they remains together for life long. The significance of vows taken in each of the seven steps are of paramount importance and highly relevant for a successful married life of the couple.

In the first set of vows taken during the first step, the couple invokes the Gods for a plentitude of pure and nourishing food and a life that is noble and respectful. The groom promises to provide for the food, welfare and happiness of his wife and children, while the bride promises to discharge all given responsibilities for the welfare of the family.

With the second step , the couple prays to the Gods to give them both mental and physical strength and a healthy life free from ailments. The groom requests the bride to fill his heart with strength and courage so as to protect the family. The bride agrees to comply, while demanding undivided attention and love as his wife.

During the third step, the Gods are invoked for blessing the couple with spiritual strength in order to successfully perform spiritual duties. The groom expresses hope that by their mutual association, their wealth and prosperity will grow and he will look upon all women as sisters. The bride promises to love her husband with single-minded devotion and treat all other men as brothers.

The fourth step is taken to ensure the attainment of happiness and harmony through mutual love and trust and a long joyous life together. The groom thanks the bride for bringing auspiciousness and sacredness into his life, while the bride promises to serve and please the husband in any manner that pleases him.

The fifth set of vows are taken to pray for the welfare of all living entities in the entire universe and for begetting noble children. Here, the groom expresses optimism for future enrichment of life and prays for the long life and prosperity of all near and dear ones. The bride, on the other hand, promises to share both the joy and sorrow of the husband at all times.

In the sixth step, the couple prays for bountiful seasons and seeks that they may go through these seasons together, just as they would share their joys and sorrows. The sixth step is taken for self-control and longevity. The groom places hope that the wife would fill his heart with joy and peace from time to time; while the bride promises to participate with the husband in all acts of righteousness, in material prosperity and in every form of enjoyment and divine acts.

Finally, with the last and the seventh step, they pray for a life of understanding, loyalty, unity and companionship not only for themselves, but also for the peace of the Universe. The seventh step is taken by invoking the prayer and sacrifice for universal peace. At this stage, the groom tells the bride that by performing the seven steps she has become eternally associated to the groom and their marriage is forever. The bride agrees happily to become his spouse forever and be in love with each other eternally.

On taking these seven steps together and having exchanged these vows of love, duty, respect, fidelity and a fruitful union, the couple agrees to be companions forever and pray that they never have any conflicts so as to break this companionship. Having sought each other out to be life partners, they agree to lead a harmonious life taking into consideration not only each other’s likes and dislikes, but also keeping in mind the good of the entire family. They pray for their unity, prosperity and happiness.

Under Hindu law, a marriage is not complete upon tying the Mangalsutra or ‘the sacred thread of marriage’ alone. According to Hindu law codes [Yalgnavakya Smrithi], completion of the seventh step is the moment of completion of marriage for all legal purposes. A couple is declared husband and wife only after the Saptapadi is complete. The ideals behind the Saptapadi acquire more significance from the fact that the married couple prays not only for their own welfare, but also for the health and prosperity of all living beings and the entire Universe Saptapadi is an integral part of all Hindu marriages, irrespective of the tradition or custom they are followed. However, the manners in which these seven steps are taken differ from place to place. In some South Indian marriages, these seven steps are taken towards the Southern direction with the groom holding the little finger of the bride and then going round the sacred fire. In other marriages, the groom holds the hand of the bride and leads her around the fire seven times. However they are done, the primary objective is to invoke the Gods to shower their blessings on the couple, while the vows are taken by the couple to ensure and guarantee a happily married life.

Every couple should not only chant the vows, but also must strongly believe in them and try to follow the assurances and promises made verbatim in their married life. It is only then they will witness love, affection, trust and prosperity growing among themselves in leaps and bounds. In present day circumstances, where one often finds that love, trust and patience is gradually fading away between the married couples, the vows taken during Saptapadi will help them to remain steady and eliminate any shreds of misunderstanding or differences that grow among couples.

ritual of Saptapadi symbolizes the journey of life

the sacred thread of marriage