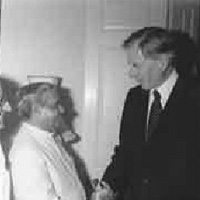 Those of us who have lived through the earlier days of free India, when the entire nation was looking forward with zeal and with a sense of national pride, cannot but look upon the present times with deep anguish and distress. I do not think India in its entire history of 5,000 years has ever reached a lower level of degradation than it has reached now. The depth of decadence to which we have sunk was exemplified by the leakage of question papers for the Joint Entrance Examination 1997 for the first time in the history of the Indian Institute of Technology. The only achievement of Indian democracy has been that it has survived unfractured for fifty plus years. Nine hundred fifty million people — more than the combined population of Africa and South America — live together as one political entity under conditions of freedom. Never before in history, and nowhere else in the world today, has one-sixth of the human race existed as a single free nation. Professor Rostow of Texas University regards the survival of Indian democracy as the most important phenomenon of the post-war era. The achievement is all the more creditable, since no other democracy has had such diversity in unity, or was such a mosaic of humanity. All the great religions in the world have flourished in India. We have 15 major languages written in different alphabets and derived from different roots; and, for good measure, our people — whom you can never call taciturn — express themselves in 250 dialects.

National integration is born in the hearts of the citizens. When it dies there, no army, no government can save it. Inter-faith harmony and consciousness of the essential unity of all religions is the very heart of our national integration. The soul of India aspires to integration and assimilation. Down the ages, Indian culture — a tremendous force of power and beauty — has been made richer and deeper as a result of absorbing what is best in outside influences and integrating those various influences to grace and enrich its own identity. Yet, an objective overview would justify confidence in the long-term future of the country. A nation’s worth is not measured by its gross national product any more than an individual’s worth is measured by his bank account. Ambassador John Kenneth Galbraith remarked that while he had seen poverty in many countries of the world, he found one unusual attribute among the poor of India — “There is richness is their poverty.” Hundreds of millions, who have no standard of living, still have a standard of life. The ancient civilization has survived and will survive when the raucous and fractious voices of today are lost in the silence of the centuries. Nature has been kind to India in one respect. It has endowed the country with the gift of producing great leaders in the darkest hour — leaders with the gift of grace who can arouse the trusting millions to lofty heights. I believe the solution for India is not to be found in adult franchise. There is a basic lesson of Indian history. Our people have always taken their moral standards from their rulers; the people have risen to great heights when they have basked in the glow of noble kings or leaders. The present generation is waiting for a leader who will make it relearn the moral values, and who will inculcate in the people as Gandhiji did, a sense of the responsibilities which fall on every citizen of a free society. It is true that eternal vigilance is the price of liberty. But it is true, in even a deeper sense, that eternal responsibility is also part of the price of liberty. Excessive authority, without liberty, is intolerable; but excessive liberty, is intolerable; but excessive liberty, without authority and without responsibility, soon becomes equally intolerable. De Tocqueville made the profound observation that liberty cannot stand-alone but must be paired with a companion virtue: liberty and morality; liberty and law; liberty and justice; liberty and the common good; liberty and civic responsibility. One last thought, and I shall have done. Today, the unity and integrity of India seems to be at stake. But “even this shall pass away”. Indian society will, in course of time, acquire the requisite political culture — the attitudes and habits of tolerance, mutual respect and goodwill, which alone can make democracy workable. The day will come when the 26 states of India will realize that in a profound sense they are culturally akin, ethnically identical, linguistically knit and historically related. The major task before India today is to acquire a keener sense of national identity, to gain the wisdom to cherish its priceless heritage, and to create a cohesive society with the cement of Indian culture. We shall then celebrate our Republic as the dependence of the states upon one another, the dependence of our numerous communities upon one another, the dependence of the many castes and clans upon one another — in the sure knowledge that we are one nation. 