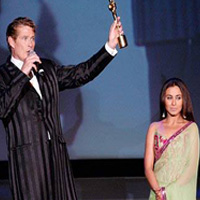 Best Film Yash Chopra for Veer-Zaara” Best Actor Shah Rukh Khan for “Veer-Zaara” Shah Rukh Khan Shahrukh Khan the most saleable actor in the business today. Crazy fans or canny distributor. His name is the guarantee. He hedges his bets by working only with best banners and top heroines. But the flip side is that he’s also willing to take risk for friends. Aditya Chopra And Karan Johar were untested entities when he signed on for Dilwale Dulhania Le Jayenge and Kuch Kuch Hota Hai. Farah Khan directing his upcoming home production film Main Hoon Na is a first timer too. His debut film was Deewana, which open the doors of film industry for him. He was playing a second hero in it but his work was appreciated. After that there was no looking back. Shah Rukh Khan has won several awards for his outstanding performance in Darr (1994), Dilwale Dulhania Le Jayenge (1995), Dil To Pagal Hai (1997), Kuch Kuch Hota Hai (1998), Baadshah (1999) …etc. He also formed a popular screen couple with Kajol. He’s now a successful producer too with Chalte Chalte. His production company “Dreamz Unlimited” is shared with other two people… one is actress, friend, co-star Juhi Chawla and another is director and friend Aziz Mirza. He is being called ‘King Khan’ and ‘Badshah of Bollywood’. He has reached to the position of choice where his films flops or hits their release is an awaited affair. Things which makes him apart from other actors are his average looks, fast speech, soulful eyes, dimples on cheeks, thick lips. He feels acting is making unbelievable believable. He feels he become a better actor after acting in his two films which are also close to his heart… Dil Se and Kal Ho Naa Ho. While

studying he fell in love with Gauri Chibba who was then studying in Loreto Delhi. He later married her before coming into films. The most talented and hard working actor known to have an inflated ego, for which he works hard to keep it floating. He is having two children a son “Aryaan” and a daughter. He loves his children very much.These day he had started reading books on science as he does not want to be sound like a stupid dad, when they’ll ask him which is bigger, Uranus or Saturn. He teaches them one new thing everyday, it could be names of Fidel Castro, Michael Schumacher, Osama Bin Laden or a place a name. He feels for the younger generation that should follow his zest for life and love of doing the best they can. They should believe that there is a purpose in life that you supposed to fulfill and follow it wholeheartedly. And never give up when you stumble and not taken seriously. Best Art Direction Sharmistha Roy for “Veer-Zaara” Best Actresses Rani Mukharji for “Hum-Tum” Best Supporting Actress Rani Mukharji for “Yuva” Rani Mukherjee – was born on 21 March 1978. Though she had the introduction into the Bollywood through her first movie Raja Ki Aayegi Baraat, she was in the news with her wonderful performance in Ghulam and with the third movie Rani was in headlines again receiving the Best Supporting Actress award from Filmfare for her active and playful performance in Kuch Kuch Hota Hai thus enhancing herself in the Bollywood. Best Choreography Farah Khan for “Main Hoon Na” She gew up on Michael Jackson’s moves and the film swings of 60s Bollywood director Vijay Anand, and grew into the most wanted choreographer in Bollywood today. But not many people know that Farah Khan is not merely a choreographer, she is the first professional to take film choreography into the realm of dance direction, a blend between the various elements of film direction and choreography. Bollywood has been a constant presence in Farah’s life; her father was a film director in the 50s and 60s, and her older brother, Sajid Khan is an actor-dance director as well. Although she loved to dance, she never received any formal dance training. Farah was on her way and there’s been no looking back since.

She’s done it all , including making Shah Rukh and Malaika swing atop a moving train in Mani Ratnam’s Dil Se. Along with establishing Hrithik Roshan as an incredible dancer, Farah’s own career took a new turn when she choreographed Hrithik in the song Ek Pal Ka Jeena in his debut film, Kaho Naa Pyaar Hai. Currently, Farah is broadening her horizons – she’s directing her first film Main Hoon Na. But film choreography will never be a thing of the past. Best Debut Female Gayatri Joshi for Swades Joshi started her career as a model. A string of successful assignments later, the sweet-faced lass landed Swades. She knows that she can be more versatile and says she has already broken several Bollywood rules the most important among them being that a pretty model who used to play a middle-class Indian mother in ads became Shah Rukh Khan’s heroine. Joshi had already ‘acted’ with Shah Rukh in a commercial. Gowarikar made her do three auditions before he decided that she was the heroine of Swades. Her attitude oozes oodles of confidence about her ability to make it in Bollywood. She was not overly apprehensive about working with King Khan or Gowariker, she says. Now, that is confidence. Joshi stands out among Bollywood heroines who generally have ‘godfathers’ backing them. She agrees that having a godfather might help initially but in the long run, it is one’s work that speaks for itself. True and one hopes with this attitude, Joshi scales great heights in the world of films. Best Actor in Villains role Abhishek Bachchan for “Yuva” Best Supporting Actor Abhishek Bachchan for “Yuva” Abhishek Bachchan was born on February 5th 1976 to Bollywood Legend and Veteran Actor Amitabh Bachchan and Bollywood actress Jaya Bachchan. He started his acting career from film Refugee opposite Kareena Kapoor. It was not a hit but his performance was to the expectations and noticed by critics also. He was engaged to Karishma Kapoor in 2002 but after few months they broke up. Abhishek’s forthcoming film is an Yashraj film venture directing by Sanjay Gandhavi. Uday Chopra and John Abraham are the other star in it.

Ram Gopal verma’s Naach. His home production film with Apoorva Lakhia, which is untitled. Best Director Yash Chopra for Veer-Zaara” It’s been seven long years since Yash Chopra directed his last film, and the anticipation Veer-Zaara had created before the release and the film’s initial response are proof enough of the Yashraj magic. However, the veteran film-maker, who is a recipient of the prestigious Dadasaheb Phalke Award, candidly admits that he “did feel nervous prior to the shooting of the film. But this is how I am and I take it as a positive aspect. I feel getting nervous is a positive sign; you make sure that everything is happening right as you take that extra step to be careful.” And the result is Veer-Zaara, another promising hit from one of the most successful filmmaker of all times. This is purely an Indian film with no western influence in music, dance or sensibility. A movie that has no violence, no action, not even raised voices, only pure emotion, although the subject of the film is cross-border love. Another interesting feature of this film is the music composed by the late Madan Mohan. A common feature in all his films, since his first film Dhool Ka Phool, is that Lata Mangeshkar has lent her voice to all the films that he has directed. “I am fortunate that she has been kind enough to sing for my films. The relationship has been built for over 40 years and now when I was trying to create history by reviving Madan Mohan’s music 30 years after his untimely death, how can she not be there,” he asks. Best Actor in Comedians role Aftab Shivdashani for “Masti” Aftab Shivdasani’s Hungama a comedy film of 2003, it was a huge hit. Aftab’s debut film was Mast opposite Urmila. He got a Film Fare Award as a New Comer for this film. He acted in lots of films like Koi Mere Dil Se Pooche, Footpath, Awara Paagal Deewana,

Darna Mana Hai etc. Lifetime Achievement Award Shammi Kapoor and Vyjayantimala Most of Shammi Kapoor successful films were in the late 1950s and 1960s. He was born Shamsher Raj Kapoor in Bombay to film and theatre actor Prithviraj Kapoor. He is the middle of Prithviraj’s three sons Raj Kapoor and Shashi Kapoor, all of whom went on to become successful actors. He acted in many fun and boisterous films. He particularly used Mohammed Rafi as his playback voice and Rafi was also his friend. Shammi Kapoor was also one of the foremost internet users in India. He is the founder and chairman of Internet Users Community of India (IUCI) and has been instrumental in setting up internet organizations like the Ethical Hackers Association. Best Music Late Madan Mohan for “Veer-Zaara” The late Madan Mohan is acknowledged as among the most respected names among Hindi film composers. During his career of 25 years, he composed for over 100 films, prominent among them being Adalat, Dekh Kabira Roya, Bhai Bhai, Neela Akaash, Sanjog, Manmauji, Woh Kaun Thi, Mera Saaya, Ghazal, Anpadh, Aap ki Parchaiyan, Haqeeqat, Chirag, Jahanara, Heer Ranjha, Dastak, Bawarchi, Hanste Zakhm, Mausam and Laila Majnu. Though proficient in all genres of music, his forte lay in songs based on light classical music, with nuances and flourishes that earned him universal appreciation from stalwarts of Indian classical music. The ‘ghazal’ was his favourite form of poetry and his compositions earned him the title of ‘ghazal king’. His use of traditional Indian instruments, especially the sitar, has been widely acknowledged. He will be best remembered for the songs he created in the voice of Lata Mangeshkar, with whom he formed one of the most durable combinations in Indian film music. He left behind various unutilized compositions, which could not be recorded by him during his lifetime, for lack of suitable situations; while some of these were alternative tunes he had composed for some of his well-known hits. Best Debut Male Akshay Kapoor for “Popcorn Khao..” A well-toned and muscular body isn’t God’s gift to him. Akshay had to work for it. He says, “Physical fitness can make it or break it. I work very hard in the gym. I do extensive weight training five days a week. It is not only the built that was difficult, to maintain it is no

easy task,” he says. “Besides five days weight training, I do not relax on the rest two days of the week. I dedicate them to cardio and abdomen exercises. I give an hour to the cardio exercises.” His fitness regime has more than just these trainings. He says, “I take flexible training too. It helps me stay flexible for dance and action sequences.” Akshay has been living in USA since his school days. His accent might be American but his heart is Indian for sure. “I love Indian cuisine. It’s my all-time favorite. My mom would always take care that we get good Indian food at home. My other favorite cuisine is Thai. But honestly, the best food is chicken makhani cooked by my mom. She also makes some amazing bhindi.” Akshay has no qualms about eating at small restaurants. His favorite eating joint in Mumbai is “Nini dhaba at Andheri. It is a very small dhaba and most of you wouldn’t even know about it. I used to eat there a lot during my initial days in Mumbai.” Best Costume Designer Manish Malhotra for “Veer-Zaara” Best Singer Male Amir Jamal for “Murder” Best Singer – Female Sunidhi Chauhan for “Dhoom” Critics’ award for Best Performance’ Kirron Kher for “Khamosh Pani”