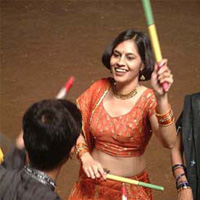 Festivals in India are a regular affair – almost as regular like the rising of sun or the coming of tides. But, there are a few which is celebrated with maximum passion and fervor, by all alike from the North to the South, East to the West!

Come October and there’s an air of joy & happiness all over. It’s the time for dance, music and devotion. It is the time for one of the most awaited festival by people from all walks of life -Navratri. An occasion when the young-hearts throb with excitement and energy and the older generation is full of devotion.

The festival of Navratri or the nine nights is one of the most prominent festivals of Hinduism dedicated to chiefly Mother Durga, an incarnation of Goddess Parvati, the consort of Lord Shiva. This is the most pious and pure time in the complete Hindu calendar.

Navratri is a festival of worship, dance and music celebrated over a period of nine nights (Nav-nine and Ratri-nights). It is celebrated from the first to ninth date of Ashwin Shukla Paksha of the Hindu calendar and is the worship of the Goddess Durga. Goddess Durga is believed to exist in many forms like Goddess Bhavani, Amba, Mahakali etc. The first nine days of the Ashwin are devoted for worshipping the Divine Mother –”MAA”. These nine days are divided and devoted to the Trinity of God worshipped in a female form – three days for Durga (Goddess of valor) three days for Lakshmi (Goddess of Wealth) and three days for Sarswati (Goddess of Knowledge and Art). The first three nights are dedicated to the goddess of action and energy – Shakti! Her different manifestations viz Kumari, Parvati and Kali are worshipped during these days. Goddess Lakshmi is worshipped for the next three days in her various aspects as the goddesses of peace, plenty and bliss. Goddess Saraswati is worshipped during the final three days of the Navratri. She is the goddess of the spiritual knowledge and the knowledge that frees us from this bind of this materialistic world. On the eighth and ninth days of the festival, Yagnas are performed as a final act of farewell that marks the conclusion of the ceremonies. On the tenth day, is the Dashami or Dussehra!

Navratri is being celebrated in India since a long time. But it was mostly confined to the indoors only – in houses or temples, and was rarely seen to be a public function. However, it is only in the last decade or so, that the festival has taken to the outdoors and is now celebrated with extreme zeal and enthusiasm – in most pompous and exaggerated style. It is not only in India, but also in far off countries like USA, Canada, England, Scotland, Kenya, Uganda, South Africa and Australia – that Navratri is celebrated in the most illustrious manner in temples and across among the Non-resident Indians.

With the passage of time and invasion of media, the festival is more becoming an ‘event’ rather than a ‘period of worship’ – but even then, the proliferation of the tradition is worth appreciating. In India itself, Navratri is celebrated in various corners of the country in contrasting forms. Regional variations of the epic saga also bring with them changes in the names and physical forms of the triumphant female deity.

The most notable and conventional variety of celebration of Navratri takes place in Gujarat – which is most conspicuously marked by dance and music – especially the traditional Garba and Dandiya-Raas dance forms – which are performed at all levels of society by men and women.

Beautifully decorated ‘mandaps’ are set up for playing Garba & Dandiya by various cultural societies, housing committees & youth social groups. Clad in dazzling and colorful traditional dresses and jewellery, young and old people dance to religious and folk music late into the night. The mood of Navratri is very colorful & unique.

Here, painted earthen pots are used to represent the Mother Goddess called ‘ghata’, which is revered as the abode of the goddess. Devotional Garba dances are performed by the Gujarati women around ‘ghata’ in circles clapping their hands or decorated sticks to the rhythm of the music of energetic traditional songs. The presiding deity of the celebration is Goddess Amba and every evening a special Aarti is offered to her to invoke her blessings. After worshipping and ‘Aarti’, Dandiya-Raas is performed in colorful traditional attire of Gujarat as a community dance all through the night. Traditionally devotees fast during the nine days of the festival taking only sweets and non-alcoholic drinks for nourishment. Navratris are considered auspicious for buying jewellery and gold.

Because of the inherent element of fun and gaiety in these dances they have no longer remained confined to Gujarat alone but have spread to other cities too. In Maharashtra as well as other parts

of North India, Navratri is observed with similar passion and enthusiasm. In Mumbai and places around, nine days of Navratri are dedicated to Goddess Durga while the tenth day or Vijayadashami is dedicated to Saraswati, the goddess of knowledge and learning. Regular functions and shows are held in halls and stadiums to organize Dandiya and Garba.

The culmination of the Navratri is the Vijaya Dashami or Dussehra in Northern India, where the effigy of Ravana is burnt on the 10th day to symbolize the ultimate triumph of good over evil while the crowds cheer on. The Hindu minorities of Kashmiri Pandits celebrate Navratri in a subdued manner as all the adult members of the household fast for nine days on water. One important ritual involves a trip to the temple of guardian goddess Kheer Bhawani in the middle of a Sarovar (lake) on all nine days. Here, dance and music is shunned as these nine days are supposed to be spent in the contemplation of Goddess here.

In the East, esp. in Bengal and also in Tripura, Bihar, Orissa and Jharkhand Navaratri is celebrated in a grand and lavish manner as Durga Puja as large idols of the ten-armed dazzling Goddess Durga posed as killing the demon Mahishasura are worshipped in almost every street. Huge ‘pandals’ are set up. Skilled artists prepare idols painstakingly for community and family worship. People offer a number of ‘saris’, flowers, fruits and ‘jewelry’ to the Goddess. There are music and dance performances everywhere as people buy new clothes, jewellery and sweets. There are grand processions on the tenth day as idols are taken with pomp and show for immersion in rivers, lakes or seas.

In southern India, Navratri celebrations are in honor of the three Divine spouses, Sakthi, Lakshmi and Saraswati. The ninth day is especially called Saraswati puja. The last day, Vijay Dashami is considered very auspicious to start new venture both in business and academics. In Mysore, Chamundi, the royal deity of the Mysore royalty is worshipped during Navratri with pomp and pageantry. There is a magnificent procession of elephants, horses, chariots and costumed attendants on the tenth day, when Maharaja goes to worship the hilltop temple of the goddess. In Tamil Nadu, Karnataka and Andhra Pradesh, women arrange ‘Bommai Kolu’, a special placing of dolls in various costumes decorated with flowers and ornaments on specially prepared steps. Nine young ‘kanyas’ or virgins are offered new clothes and sweets as the goddesses and married women share flowers, kumkum and snacks among themselves. In Kerala, Navratri signifies the beginning of formal education for every child aged 3-5 years. While the worship goes on in the temple for all ten days, it is only the concluding three days which are really important. Ashtami is the day of Ayudha Puja, when all the tools at home are worshipped; On Navami, day, honor Goddess Saraswati is honored by worshipping the books and records at home; while Dashami is the day of making a new start !

The spread of Indians in different parts of the world has resulted in the passing of these festivals in those distant lands too. This is more conspicuous in places like United Kingdom, United States and the East Africa – where there are a large number of Gujarati expatriates residing. 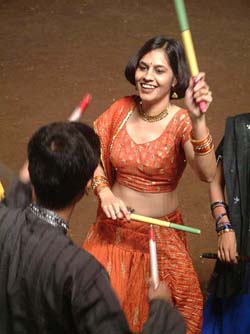 In the United Kingdom, Navratri has a special dimension. While the occasion is observed in all places wherever the Indian Diaspora is present, the county of Leicester needs a special mention. Leicester’s thriving Gujarati community has made the city one of the biggest hosts of Navratri celebrations outside India. Various programs observing the Navratri is held in over fifty locations through out the county, where about a hundred thousand people, mostly NRIs congregate.

The venues across Leicestershire and all other places in UK are filled with the sounds of Indian drums, traditional folk songs and the clapping of hands, as Indians – young and old celebrate the festival of Navratri. Thousands of devotees will be packing out venues across the county over the nine night period, with the participants dressed in traditional Gujrati costume playing Dandiya or dancing to the tunes to devotional or popular numbers played through. It is indeed an occasion of getting together , and remembering India amidst the busy and professional Non-resident life.

Similarly, in the United States, the Navratri festival is mainly organized by the migrant Gujaratis. While there are places where the festival is organized during its actual nine days, in some places it is held on Friday and Saturday nights on four consecutive weekends during the month of October, mainly due to paucity of time and opportunity. Like Leicester in UK, Edison, New Jersey in the United States is very much in the frontline for hosting a mammoth Navratri festival.

Here, around ten thousand strong Gujarati community converges on the flood plain at the mouth of the Raritan River to offer their prayers. In a massive celebration of the victory of good over evil devotees in colorful holiday attire dance barefoot through the night into the early hours of the morning. In graceful swirls and twirls, thousands circumambulate the image of the great female deity Amba who astride a tiger rides triumphant holding in her eight arms the weapons of successful combat against the evil demon. This famous Navratri festival of Edison, New Jersey and the raison d’être for its organizers, the Indo-American Cultural Society, have gained immense popularity where thousands met each Navratri night and have often forced the organizers to seek a larger facility.

In other parts of United States, esp. in places inhabited by Indians as well as in several Universities, the Navratri is celebrated through prayer, music and dance. Dandiya competitions are held, Garba is choreographed and amidst the fun and frolic, the expatriates celebrate their privilege to be an Indian.

Places like Sydney in Australia, Nairobi in Kenya, Kampala in Uganda, Johannesburg and Pretoria in South Africa also witness centrally organized functions of Navratri, mainly hosted by the Gujarati expatriates.

Irrespective of who is where and doing what, the festival of Navratri coheres the Indians in India and abroad into a single string and united – they celebrate the Mother Power through dance, music and prayer. This is the essence of Navratri – to get together, forgetting all past sins and mistakes, forgiving one and all and dancing and singing into a fresh beginning, while seeking the blessings and guidance of the Supreme Mother – Ma Shakti !!