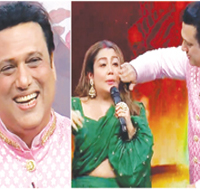 Neha Kakkar breaks down in tears at Indian Idol 13. 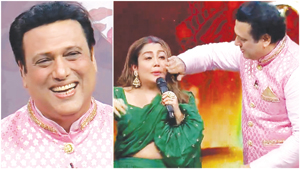 It was truly a moment of joy and achievement for singer Neha Kakkar when she heard superstar Govinda say that he is a great admirer of her songs. It was a special episode of Indian Idol 13, where Govinda, his wife Sunita, and daughter Tina were invited as special guests. Sunita said that Govinda is a great fan of Indian Idol judge singer Neha Kakkar. Hearing this, Neha appeared excited and joyful. Sunita requested that they dance to Govinda’s famous song “Main to Raste Se Ja Raha Tha.” Neha instantly agreed and the two of them danced to the song.

After the dance, Govinda praised Neha as a brilliant artist. He also wanted to hear her popular dialogue “Paisa Kamao.” Neha was so touched by this that she broke into tears, saying that she grew up watching Govinda’s movies, and now the superstar wants to hear her dialogue. It was an amazing moment for her and cried while hugging Govinda. The moment of emotion was shared by the many people who were present. Sunita said that she loved Neha, and Neha, too, said that she loved her.