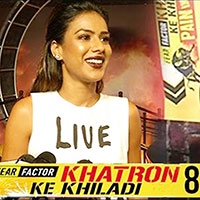 Ekta Kapoor is all set to bring back the fourth season of the popular supernatural show Naagin. Promos for Naagin 4 are already being aired on Colors TV and feature two naagins.

Recent reports reveal that Nia Sharma and Aalisha Panwar have been selected to play the leads in Naagin 4. Earlier, a number of names were floated as potential naagins for the new season including Puja Banerjee, Krystle D’Souza and Hina Khan.

Nia and Aalisha were both last seen together in Color TV’s Ishq Mein Marjawan, along with Arjun Bijlani. Arjun was a part of the first season of Naagin in 2015, opposite Mouni Roy. He also made a guest appearance in the second and third seasons of the show. In the first two seasons Mouni played the lead, while in Naagin 3 Surabhi Jyoti was the main star.

Nia is known for her roles in Ek Hazaaron Mein Meri Behna Hai and Jamai Raja. She also appeared on Khatron Ke Khiladi 8 and was last seen in the web series Jamai 2.0.