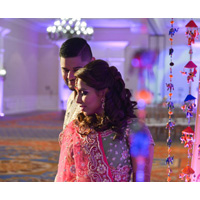 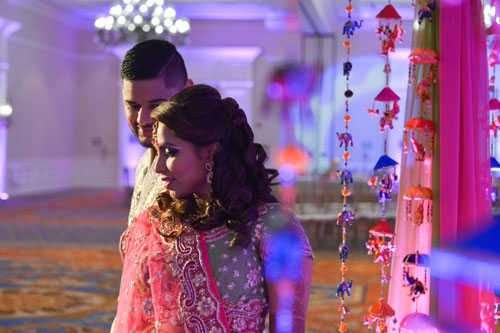 At 27 years-old, Nikki Patel, based in Tampa, and Mayur Patel, who lived in Texas, were both looking for their life partners through the Shaadi.com web portal. Nikki first expressed an interest in September 2013, and one month later, Mayur accepted the request. The two began talking to each other, and what initially was restricted to just a few messages during the day, became long phone calls, emails, texts, and every other means of communicating. Soon, the two met and after dating for nine months, the couple announced their decision to get married. Needless to say, both families were thrilled.

Nikki took on planning for the entire event. The festivities began with an engagement party in July 2014. The coupled hosted the event at the Stamford Marriott in Connecticut with over 500 guests in attendance. Every detail from the food to the decoration was taken care of by Nikki, and the guests enjoyed thoroughly. Soon after the engagement, Mayur moved to Florida, which helped simplify matters as the couple could easily plan. Additionally, Nikki was able to rely on Mayur for all the support that she needed.

After a lot of discussion and visiting several venues, the couple chose the Tampa Waterside Marriott as the site for wedding events. The hotel has always been Nikki’s favorite choice, and it is one of the few venues in Tampa that can comfortably accommodate a guest list exceeding 800 people. The couple chose a Rajasthani theme for the wedding, so décor consisted of bright blues and greens that set the stage for all events. The mehendi ceremony was hosted at Nikki’s house where the Moroccan themed décor coupled with mouth-watering food ensured that the guests enjoyed themselves.

All the pre-wedding ceremonies for Mayur and his family were done at the Stamford Marriott Hotel as most of his family is based there. The couple did hire a wedding planner to coordinate on the day of wedding, but Nikki did most of the planning before then herself. Even the minor details like printing the itinerary for the ceremony to keep the guests informed was on her to-do list. With the help of reliable vendors like All That Shines Event Planning, Fine Art Productions, and the support of the hotel staff, Nikki and Mayur said their wedding vows in a stellar event that has become a memory that they will treasure for a lifetime!