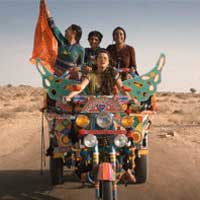 Leena Yadav’s ‘Parched’ also known as ‘LA SAISON DES FEMMES’ in French, has received a lot of critical acclaim.  The film has won many hearts across the globe and will be celebrating its 25 glorious weeks in France this week, making it a silver jubilee success at French Box Office.

The French Distributor, Eric Lagesse explains, “The lifespan of films in France is about 3-4 weeks, but the word of mouth for Parched was so strong that the success is astounding. It is rare for film to have such a long career in the French theatres.”

The film features Tannishtha Chatterjee, Radhika Apte and Surveen Chawla in lead roles. Parched’ is a film which gives us a message that inspite all the hardships faced by women, their undying spirit and the zest to live life is outstanding.

High-stress jobs may to lead to early grave: Study
Manoj Bajpayee: My character in ‘Love Sonia’ is one of the deadliest characters I have played so far