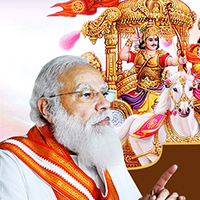 PM Narendra on The Bhagavad Gita 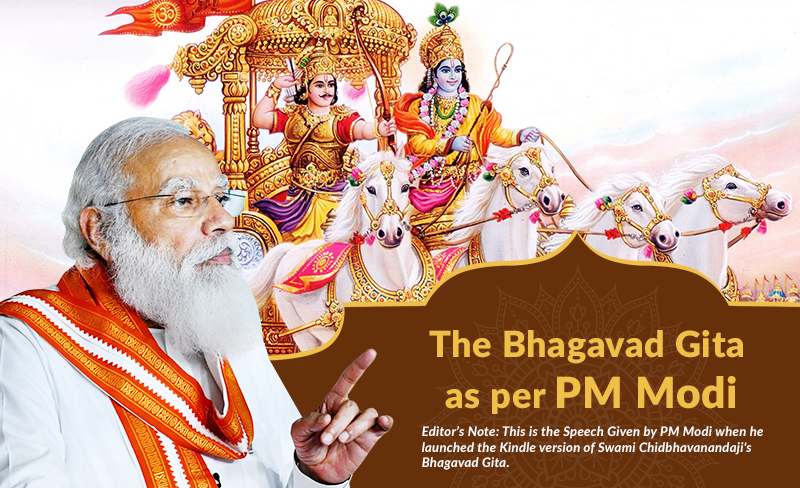 Editor’s Note: This is the speech Given by PM Modi when he launched the Kindle version of Swami Chidbhavanandaji’s Bhagavad Gita. 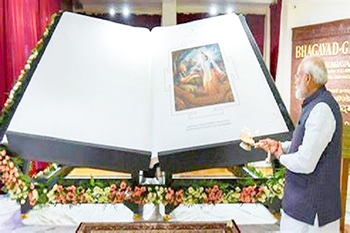 This is a unique programme: An e-book of the Gita with commentary by Swami Chidbhavananda Ji is being launched. I would like to appreciate all those who have worked on this. Thanks to this effort, traditions and technology have merged. E-books are becoming very popular among the youth. Therefore, this effort will connect more youngsters with the noble thoughts of the Gita.

This e-book will also deepen the connection between the eternal Gita and the glorious Tamil culture. The vibrant Tamil diaspora, spread globally, will be able to read it easily. The Tamil diaspora has scaled new heights of success in many sectors. Yet, they are proud of their cultural roots. They carry with them the greatness of Tamil culture wherever they go.

I would like to pay homage to Swami Chidbhavananda Ji. Mind. Body, heart, and soul, his was a life devoted to India’s regeneration. He planned to study abroad, but destiny had different plans for him. One book he saw at a roadside bookseller – Swami Vivekananda’s Madras lectures – changed the course of his life. It inspired him to put the nation above everything else – and serve the people. In the Gita, Shri Krishna says: 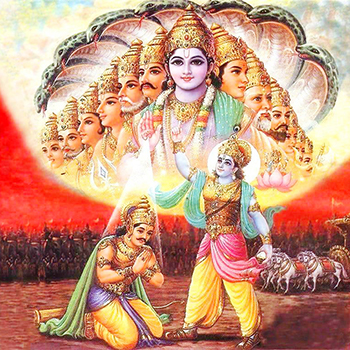 This means, ‘Whatever great men do, many are also inspired by them to follow.’ On the one hand, Swami Chidbhavananda Ji was inspired by Swami Vivekananda. On the other hand, he went on to inspire the world with his noble deeds. The Shri Ramakrishna Tapovanam Ashram has been carrying forward the noble work of Swami Chidbhavananda Ji. They are doing commendable work in community service, healthcare, and education. I would like to [say that I] appreciate the Shri Ramakrishna Tapovanam Ashram and wish them the best for their future endeavours.

The beauty of the Gita is in its depth, diversity, and flexibility. Acharya Vinoba Bhave described the Gita as a mother who would take him in her lap if he stumbled. Greats like Mahatma Gandhi, Lokmanya Tilak, [and] Mahakavi Subramania Bharathi were inspired by the Gita. The Gita makes us think. It inspires us to question. It encourages debate. The Gita keeps our mind open [to new ideas]. Anybody who is inspired by the Gita will always be compassionate by nature and democratic in temperament. 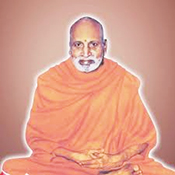 One would think [that] something like the Gita would have emerged in peaceful and scenic surroundings. But, as you all know, it was in the middle of a conflict that the world got the finest life lesson in the form of the Bhagavad Gita.

The Gita is the greatest source of knowledge about everything that we can hope for. But have you ever thought what causes this knowledge to pour out from the words of Shri Krishna? It is vishaad or sadness. The Bhagavad Gita is the treasure of thoughts that reflects the journey from vishaad to विजय. When the Bhagavad Gita was born, there was conflict; there was vishaad. Many feel today [that] humanity is passing through similar conflicts and challenges. The world is fighting a tough battle against a once-in-a-lifetime global pandemic. The economic and social impacts are also far reaching. In such a time, the path shown in the Srimad Bhagavad Gita becomes ever relevant. It could provide strength and direction to [help us] once again emerge victorious from the challenges humanity faces. In India, we saw many instances of this. Our people-powered fight against COVID-19; the outstanding spirit of the people; the courage of our citizens – one can say that behind this are glimpses of what [the] 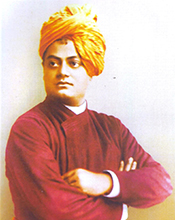 Gita highlights. There is also a spirit of selflessness. We saw this time and again when our people went out of [their] way to help each other.

Last year, there was an interesting article in the European Heart Journal. This is a peer-reviewed journal of cardiology published by the University of Oxford. Among other things, the article talked about how the Gita was most relevant in these COVID times. The Bhagavad Gita was described as an accurate guide for living a fulfilling life. The article compares Arjun to the healthcare workers, and the hospitals as battlegrounds for the war against the virus. It [showed] appreciat[ion] [to] the healthcare workers for doing their duty; overcoming any fear and challenge.

The core message of the Bhagavad Gita is action. Bhagwan Shri Krishna says: 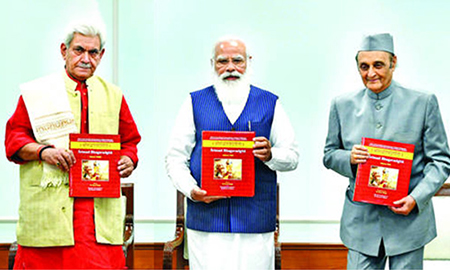 He is asking us to [take] action – because [action] is far better than inaction. In fact, he says, we cannot even take care of our [own] bodies without action. Today, the 1.3 billion people of India have decided their course of action. They are going to make India aatmanirbhar, or self-reliant. In the long term, only a self-reliant India is in everyone’s [best] interest. At the core of aatmanirbhar bharat is to create wealth and value not only for ourselves but for the larger [set of] humanity [as a whole]. We believe that an aatmanirbhar bharat [India] is good for the world. In the recent past, when the world needed medicines, India did whatever it could to provide them. Our scientists worked [quickly] in a [short amount of] time to come out with vaccines. And now, India is humbled that vaccines made in India are going around the world. We want to heal, as well as help, humanity. This is exactly what the Gita teaches us [to do].

I would [e]specially urge my young friends to have a look at the Bhagavad Gita. The teachings are extremely practical and relatable. In the middle of fast-paced lives, the Gita will provide an oasis of calm and peace. It is a practical guide for several dimensions of life. Never forget the famous verse –

It will free our mind from fear of failure and put our focus on our action. The chapter on Gyan Yoga deals with the importance of true knowledge. Bhakti Yoga, teaching us the importance of devotion, is touched upon in one of the chapters. Every chapter has something to offer, to cultivate a positive frame of mind. Above all, the Gita re-enforces the sentiment that each one of us is a spark of the Supreme – the all-powerful Divine.

This is something even Swami Vivekananda highlights. My young friends would be having to cope with many tough decisions as well. During such times, always ask yourself: ‘If I were in place of Arjuna, facing this dilemma, what would Shri Krishna ask me to do?’ This works brilliantly, because you suddenly start detaching your own likes and dislikes from the situation. You start looking at it from the eternal principles of the Gita.

And it will always take you to the right place and will always help you make tough decisions. Once again, congratulations on the launch of [this] e-book [of the Gita], with commentary authored by Swami Chidbhavananda Ji.

e-book of the Gita with commentary by Swami Chidbhavananda Ji

Bhagavad Gita, Gita is the greatest source of knowledge