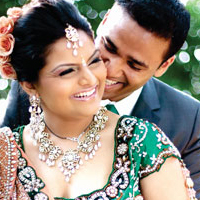 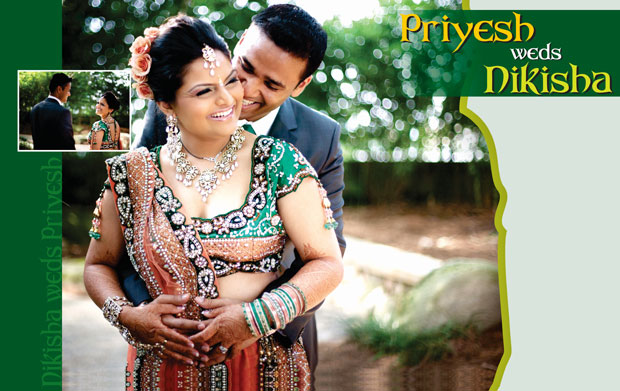 Love was not exactly in the air when Priyesh and Nikisha first met during garba in 2005. They did become good friends though and friendship gradually matured into love. In 2008, the two realized that they were meant to be soul mates. After three more years and a series of love letters later, Nikisha told Priyesh that he was her diamond in the rough and she had fallen in love with him. On June 2, 2011, after one of their monthly dates, Priyesh got down on his knees and produced a beautiful diamond ring. He said, “Your rough diamond has now been polished. Will you marry me?” Needless to say, Nikisha was over the moon when she said yes!

The wedding was planned for one year later on June 30, 2012. Priyesh and Nikisha wanted a typical Indian wedding, with all the traditions, intricacies, frills and fancies. They hired KISCubed, an Atlanta-based wedding consultant, so that they could be free from stress to enjoy the wedding completely. The wedding planners did a wonderful job of arranging everything, from the pre-wedding events to the post-wedding reception.

The pre-wedding ceremonies were held at Nikisha’s home in South Georgia, which overlooks a lake. Done up in Morrocan style with purple, pink and green as the theme colors, the outdoor venue of the mehndi ceremony was brightly lit and the couple’s monogram adorned the pool. Lanterns created a perfectly Indian feel. The ambiance reverberated with music and the happy laughter of guests getting mehndi applied. An open barbecue counter and bar completed the festive occasion.

The BAPS Temple of Atlanta, because of its stunning Indian architecture and spiritual ambiance, was chosen as the wedding venue. The bride arrived with her sisters looking resplendent in traditional attire. The groom looked traditional yet suave as he arrived in a limo with his sisters, cousin and the cousin’s wife.

The mandap was created in the shape of a lotus with a dazzling chandelier at the center. The evening wedding, complete with the picturesque background of the setting sun, created some very heart warming moments as Nikisha and Priyesh took their sacred vows around the fire. The programs for the wedding ceremony were shaped like a fan with red and gold writings and explained the significance of Indian wedding rituals. Traditional music with dhol and shahnai accentuated the Indian ambiance.

Held in the hotel where out of state guests were accommodated, the reception was like another fairy tale. In the reception hall that was decorated in peach, emerald and gold colors, tables were laid with peach, light green and pink flower arrangements adorning each of them. Candles were lit on top of each table. The round dance floor had the couple’s monogram and was surrounded with lounge seating for the couple and their families. Entertainment was a mix of Indian and hip hop music. The bride and groom took to the dance floor for their first dance to the song “Raja koRani se Pyaar ho Gaya” and then the bride danced with her father to “Chandaki doli.”

The wedding was simply perfect, except for those few stressful moments when the groom and his family got stuck in a traffic jam while traveling to the wedding venue. Priyesh and Nikisha tell future couples-to-be to keep calm and enjoy every moment. They say that everything always falls into place in the end.