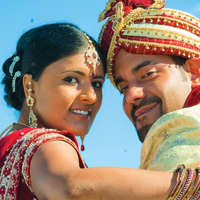 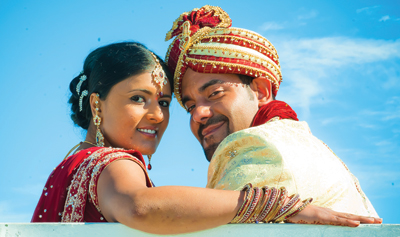 Sometimes, life change can occur during the simple act of enjoying a cup of coffee together. For Pablo and Rinita, this was certainly the case when they met at a local coffee shop in Orlando, Florida. Sparks flew, and their romance blossomed. Six years later, they made a lifelong promise to share the rest of their lives together as husband and wife.

On New Year’s Eve in 2011 during a trip to Captiva Island, Florida, Pablo took Rinita for a walk along the beach shore with a cup of coffee, symbolic of how the couple first met. Pablo escorted Rinita up the stairs of a marina dock known for its magnificent view. As they gazed at the dazzling starlit sky, Pablo got down on one knee and proposed to Rinita stating that she would always be the brightest star in his sky. The couple enjoyed the night as a celebration of both the New Year and their newly changed status.

For their wedding arrangements, the duo went on a three-week shopping spree to India accompanied by the bride’s mother, Nila. Soon after the fun-filled trip, they finalized their wedding destination – the very same Captiva Island where the couple was engaged! The spacious three acres of land surrounding the estate on the island allowed the couple to accommodate each of the wedding events on different areas of the property.

All Hindu pre-wedding ceremonies were hosted outdoors on the estate property with a traditional set-up under the shade of a tree in a canopy of colorful sarees. A Christian wedding ceremony followed a few hours later as an intimate group of guests were escorted in golf carts to the beach via the estate’s private beach access. Following the Christian wedding ceremony, the wedding party relaxed at a poolside location on the estate property to enjoy mehndi and sangeet night. The theme “Paradise” perfectly captured the island ambience and was complete with bamboo dinnerware, tiki torches, and tiki bar.

The Hindu wedding ceremony took place the very next morning beginning with the baraat. The handsome groom stunned in a red and gold wedding sherwani and safa. Pablo arrived in a BMW, and the wedding party danced their way to the wedding mandap located on the bayside of the property.

Rinita, accompanied by her uncle, boarded a seaplane from the marina where the proposal had taken place. Much to the guests’ surprise, they landed on the open water where a boat was waiting to dock them right next to the mandap. As soon as the bride landed, rose petals rained down on her while a few girls danced down the aisle. Later, Rinita was escorted to the mandap by her six uncles. The beautiful procession was perfectly timed, flawless and truly memorable.
A formal reception was held in the evening during which the guests enjoyed festivities alongside fire pits and delicious Punjabi cuisine. The newlyweds enjoyed two nights on the island before returning to Orlando, Florida, for a hometown wedding celebration. The Orlando party hosted 400 guests and had a traditional Gujarati theme. The entire night’s events were a surprise for the newlyweds, planned by family and friends.

When asked what advice they would give to those planning a destination wedding, the couple agreed that picking the wedding venue was the single most important decision they made. “While hotels and resorts offer fantastic all-inclusive wedding packages, they may not accommodate much customization. On the contrary choosing a location that allows you to be at liberty to play around with ideas – while challenging – can lead to a wedding that is exactly what you have always dreamed of!”