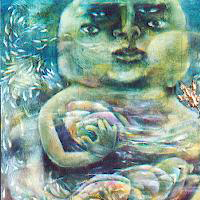 Universe As little children you would have read a lot of fairly tales. Many of these tales end happily with the simple statement “And they lived happily forever”. These are the fundamental wishes which we nurture within us as we grow up. We want to live happily. And we want to live forever.

What does happiness mean? Is it a state where all wishes have been fulfilled? Yes, to some extent. But it is only a transient happiness. Because when a wish is fulfilled its potential to give you happiness is extinguished. A tasty pizza is an object that can give you happiness till it disappears down through your throat. The unhappiness of not having the pizza was removed by going through the process of getting it and eating it. Now the pizza that has disappeared into your stomach could be an agent of unhappiness if it doesn’t agree with your system and you cannot digest it. Happiness is actually a combination of two things. The first component is the feeling that whatever you want is within your reach. The second component is the ability to digest a thing when you have it. Happiness is a state when the feeling of deprivation is totally absent. In that state you don’t feel deprived of dreams. You don’t feel deprived of the means for achieving your dreams. You don’t feel deprived of the power to digest the things you ingest in that process. Putting it in a different way, happiness is being resourceful being prosperous.

Now if we wrongly imagine that happiness comes from the grabbing of all the things we want we are opening the door to unhappiness. Gluttony can never bring you happiness. It can only provide a flabbiness that adversely affects your agility and create a permanent feeling of dissatisfaction that, in effect, intensifies your feeling of deprivation. When you are grabbing something here, you are also being grabbed by the fear of death. Fear of deprivation is the rope by which death marshals you to him. This is beautifully expressed in a verse in Kathopanishad.

So being resourceful is the important thing, and not grabbing things to possess them. Resourcefulness is the ability to cope with anything spontaneously with the minimal increase in entropy – the degree of disorder. This high degree of productivity is what connects this world and the higher world  what connects your lower self with your higher self. This union is what we call Yoga. In Bhagavad Gita, Sri Krishna tells to Arjuna:

This resourcefulness comes from the thorough knowledge of everything concerned with this world and mastering the techniques of applying that knowledge. That is the relevance of the studies of the worldly subjects. This resourcefulness gives you the structural integrity and dynamic balance that permits you to commit a substantial part of your energy for higher pursuits.

While immortality is something that transcends this world, the fear of death is very much a worldly phenomena. It is lurking in the fear of deprivation that we feel in varying degrees on different occasions. Fear of death as an end of life is only the same phenomenon in its extreme form. The attempt to gain immortality should be accompanied by efforts to overcome the fear of death. This is clearly brought out in the Isavasya Upanishad.

So you should learn about the world where you live in as much as possible. Darkness produces fear. We do not know what is hiding in the darkness ready to attack us. When the light of knowledge removes the darkness there will be nothing in this world that can frighten you. You will know exactly how you should be responding to each and every situation. With this liberation from fear, you are free to set your sights higher.

What is the higher pursuit? Once you have mastered an abundance of resources in the physical, emotional and intellectual planes you have freed yourself from any feeling of deprivation from the fear of death from the ropes of Yama. You have to be above the manipulations of death if you want to progress beyond this world. When that is done you are ready to take on the next challenge. That is, the issue of immortality.

By cultivating yourself to be resourceful you have made yourself a seaworthy boat. But this boat while remaining in the open seas is always swaying with the waves of the sea. Your resourcefulness helps to take care of all events effortlessly. But each one of your actions attracts more actions and the boat keeps swaying too and fro dangerously. That is what happens to a boat when its engine is switched off. These swaying motions are what keep you pinned to the worldly plane. Resourcefulness by itself is not a ticket for going upwards. With all the resources Arjuna felt confused. Sri Krishna had to coax him out of his depression to move on the path of spiritual progress.

If you want to get off from the worldly plane you must develop a thrust to propel you away from this plane. Then in comparison to that thrust the disturbances that used to rock you so much will lose their significance. The new pattern of movement set by this thrust will make it more and more difficult for the disturbances to affect you. Just as a speedboat gliding over the waves remains unaffected by the waves you will sail smoothly under the power of this thrust.

Before switching on the engine and allowing the thrust of the engine to take over you have to have a clear idea about the destination for the journey. Otherwise the smooth sailing could lead you to even bigger troubles. What could be the destination and what should be the path that we should traverse? The answer to this question appears in the Narayana Upanishad.

This ideal lies outside the worldly plane. It is capable of giving anything and is totally independent of everything that we can conceive of. It is greater than the greatest. In brilliance it excels the sun. It can empower everything in this universe. In darkness it is beyond the darkest dark hole. Here darkness is the state when there is no energy. This dark blackhole can provide everything in this universe with relevance. It attracts everything to it. So this purusha has the power to energize others as well as the power to absorb the energies of others. In this purusha the synthesis of all dualities of the world takes place. Identification with this purusha is the only path that is worthy of being pursued. Anything dedicated to this purusha comes back to you sustaining a stream of energy that never comes to an end. By keeping in touch with this ideal you experience immortality.

We experience reflections of this in the worldly plane too. You maintain a commanding position, not by taking sides with any of the persons working under you, but by resolving the conflicts arising between them by applying a higher wisdom. A duality is a potential conflict. Your ability to resolve dualities at higher and higher levels determines how far you can make it to a truly commanding position. How much of an organization you can hold together with integrity? That is the question being asked again and again. When you have acquired the potential to resolve all the conflicts in the worldly plane by your resourcefulness you are now poised to resolve the conflict between the worldly plane and the plane transcending this world bounded by space and time. So the purusha gives you the ideal for setting your path for application of the thrust.

All these aspirations have their place in your life. Only when they are taken together they can hold you together and lead you up. If you give up any one of them you lose the possibility to get liberated as an intelligent being. If you neglect your aspiration to accumulate without satisfying your needs you will be forced to depend on others. That dependency will cramp your abilities to dream and move. Instead of being a generous person it is more likely that you may end up as an unhappy person nursing one’s own regrets. Similarly, neglecting the other aspirations in the worldly plane also have their own ill effects. An enlightened person knows the difference between these aspirations and knows how to give each one of them their rightful place in one’s life.

Even while remaining in this world positioned by his aspirations he is constantly aware of the transcendental source from where this universe bound by time and space is projected, and where it perpetually resides. He knows it with all his being. And identified with the immortal brahma he too attains immortality.

World is for the living people. Both the conquest of death and immortality are to be attained while living in this world itself. So make the full use of your lifespan by keeping your ears open for the voices of spirituality emanating from all the manifestations of divinity around you right from the early stages of your life.